It’s been sometime went out as family which includes my uncle’s family, with whom we lived as a single family once and still being oneness in mind except living at independent homes. The real plan was I alone going out with my uncle’s family but later my parents decided to join our undecided destination on my wish which was supposed to go out of city and have lunch at somewhere as a kind of picnic we usually do. 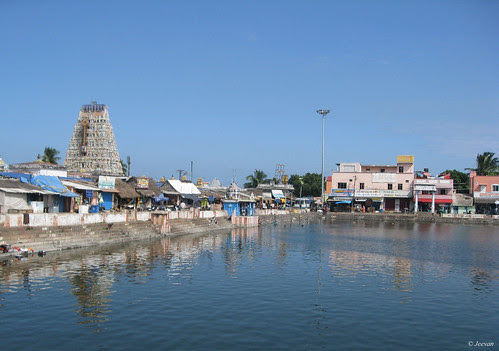 (Thiruporur temple tower and tank)
Being bored often taking the ECR (East Coast Road), we decided to go through OMR (Old Mamallapuram Road) and come via ECR to home in Thiruvanmiyur... but later our plan changed and instead of going simple this way, parents wished to go to Manapakkam Kanni Koil (Virgin temple) near Chengalpet, on the bank of River Palar. We had been to this temple more than a decade ago and the deity in this temple is 7 stones, and it is considered as a deity common amongst the traditional family deities (Kula Deivam). 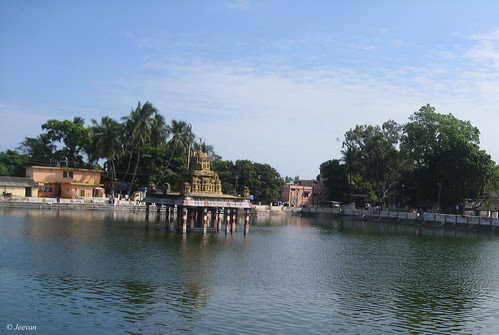 (Temple tank, Thiruporur)
It was early noon and sun was scorching bright and there wasn’t a change on our track and instead we extended and took the Thiruporur – Chengalpet route to reach the temple, which is among my favorite routes passes through forest, little mounts, villages and paddy fields. It’s a single lane road from beginning and only now has took some widening process and it doesn’t look like affection the environment and nature for good and the gladder part was its unchanged for decades.

We took refrain under a banyan tree for lunch on our way and the cool breezy shadow under the tree gives space for fresh air and the village environment and paddy fields beside send me back in the essence of soil scent and memories. I have spent many of my summer holidays in villages and its experience is one among the bliss and the smell comes out from soil and along the cow dung and firewood smoke at early dawn and evening is unequal to anything lavish. 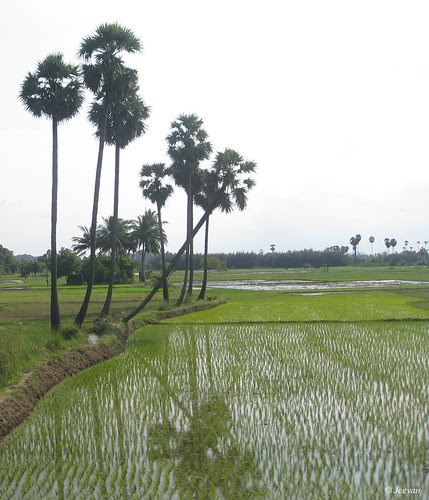 (young paddy field near my grandpa’s village on the way)
The Kanni Koil is 5-6km away from Chengalpet and since Sunday it was crowded and looked like a village festival and vehicles were parked lot and activates of cooking and head shaving function for kids where hold to end at each corners and could see newlyweds with garlands to come and worship their family deity. By the time we left the temple, the sun hides away leaving dusk behind and mild coldness in air and in little mounts and paddy field backdrop cherish the mood of hill stations.
The return journey was very pleasant and we took Thirukalukundram – Mamallapuram route to connect ECR which bears enough greenery and paddy fields and lakes being filled with mild foggy at visible distance and little coldness to sense. Mind was thinking about cuppa and dad asked me understanding my favor for having coffee at countryside or little town tea shop which I believe and tasted to be nice and shops here uses direct cow or buffalo milk for coffee or tea. But sometime its disappointment waits for me and this time to the roadside café where we drink coffee serve us a hot water kind of coffee and it seems they also use the mixed packet milk. 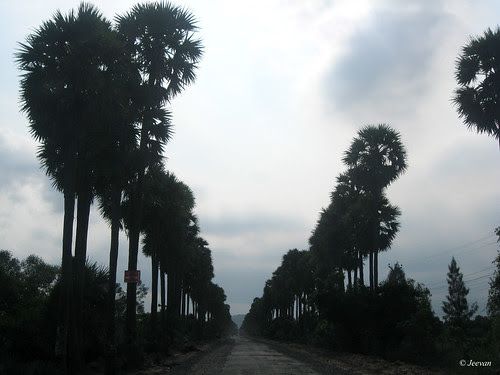 (Row of palmyrah trees on the way to Chengalpet from Thiruporur)
The usual Sunday busy bee kind of traffic waits for us after Mamallapuram, delayed more than 45 minutes to stand in queue to the slow motion snail creeping drag by vehicle after Mayajaal. It’s like on Sundays the city’s inner are easily accessible than driving from outside the city. This time cousin took control of the wheel and dad take refrain and caught up with his paper reading and guiding cousin on his minor mistakes and on my part kept alerting him on potholes and speed barkers since he’s in his early driving experience. It’s quite enchanting over chatting and spending quality time with family and sharing thoughts on behalf changes and wish for residing among quiet village’s en route!
Posted by Jeevan at 2:03 am

Thanks for sharing this experience. The pictures are nice too.

Lovely description with mind-blowing photos. I liked the photo of paddyfield very much with nice reflection of the coconut tress.

This is absolutely fantastic, Jeevan. Having undertaken a similar trip, I can share the ecstatic feeling!

Wonderful shots from your exciting trip.

Beautiful photos, Jeevan. And my favourite is the paddy field. It remind me of my father's place in the Phils.