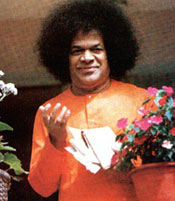 The boy had an inclination for the spiritual. He dropped out of school in the 8th standard. At 13, he declared that he was the reincarnation of Sai Baba of Shirdi, a revered saga in Maharastra, who died in 1918. He announced that he had a mission in life; he did not belong to family.

08/03/1940 : Stung by a scorpion, his health was impaired. Medical consultations did not help and Sathya continued to be abnormal.

25/05/1947 : Historic letter to his brother, explaining his mission and his determination.

06/07/1963 : Guru Purnima the miracle of compassion: Bhagwan takes upon himself the paralysis of a devotee. Announces that he is Shiva-Shakthi Swaroopa.

16/05/1968 : First World Conference of Sri Sathya Sai Seva Organization in Bombay. Explains in details about his incarnation and mission.

26/08/1975 : Turns back the floods in Chitravathi to save the village of Puttaparthi.

anonymous - dont make me laugh with that stupid website!

K said...
This comment has been removed by a blog administrator.
11:40 pm

Arjuna - me too wish him a happy Birthday.:)

80 years-my God I didnot know that now does he look like. On a lighter vein is his hair naturally black even at this age.

Vasabnthi - After a long time to see your comment on my blog, thanks friend. That is the secret of Baba.

my life after near death experiences said...

Sai baba! I have had dreams of baba for years, though he does not want me to become a devotee as such. 80th birthday eh? he says he will live to be 96 [95 western age-reckoning].

I found a site, recently, where a devotee exposes the esposers, those who dislike baba.


Here is a site that exposes the exposers of Sathya sai baba!
many of these baba haters who post over and over and over about how sai baba has sex with young boys, etc....These people either are very very Fundamentalist christians
or themselves have been in programs for sex offenders, themselves!
---------------

Swami Saiexposedananda said...
This comment has been removed by a blog administrator.
8:05 pm

I was a devotee of Sathya Sai Baba for just over a decade, and made six trips to see him in India. Now no longer a devotee, I use this blog to record memories, comments and muses on the SB scenario and also point out inaccuracies in SB's philosophical and theological presentation.: