Will the Bird Flu affect India? 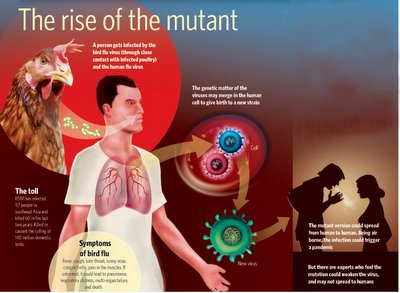 India prepares for a possible avian flu outbreak as migratory birds fly in.


The Kadris love to eat chicken daily. But with reports of the possibility of migratory birds bringing the avian flu virus to India and infecting poultry, they are fighting temptation. "Dry chicken is what is eaten these days. Now Kadris eat chicken only once a week.

Well-cooked meat won’t carry the virus H5N1 anyway. What Kadris should avoid is close contact with infected birds, their droppings or the air contaminated with faecal vapours. Kadris is only being extra cautious, like many others around the world these days, in case the virus should jump from birds to humans and trigger a pandemic. Like in 1957, when the H2N2 strain emerged in China and killed around 7,50,000 people worldwide, or In 1968, when the H3 strain showed up in Hong Kong and claimed 7,00,000 lives around the world.

Though some experts believe it may not happen because the virus might become less lethal after mutation, around 30 nations met recently in Canada to discuss the preparedness. In India, 3,207 blood and faecal samples of poultry from various states, sent to the High Security Animal Diseases Laboratory in Bhopal, India, from July to September, have tested negative. But with migratory birds starting to descend on the country, testing times are ahead for the government, which has set up an inter-ministerial task force to watch out and ensure availability of medicine. Government cannot wait for the outbreak to happen, they are coming out with a national strategy as per WHO codes.

Having warned all the Indian states, the government is monitoring 50 bird sanctuaries. So far they have not found any sign of the virus. They are working with the Bombay National History Society. Government are asked to report sick or dead birds, there is a little early to predict as India gets avian visitors till May. The danger areas are the eastern borders and the Himalayan range. While birds coming from China could be a cause for concern for the northeastern states, Siberian birds from Europe could pose danger for Kashmir. In Gujarat, which has five bird sanctuaries and over 20 big wetlands, bar-headed geese, which are believed to carry the virus, could show up in mid-November. The three species great cormorant, great black-headed gull and great brown-headed gull that come to Gujarat will also be watched. Bird watchers and farmers in the state have been told to report to the forest department if birds are found dull and shivering.

However, the Food and Agriculture Organization has discouraged their killing or destruction of their habitats. Destruction, authorities say, would disperse the population but not reduce the risk or change the course of the avian flu infection in poultry. The Bhopal lab has devised a method of testing by scanning the droppings

where the virus can survive for 105 days at temperatures less than 25 degrees C.
Were the flu to spread, experts fear India would be short of vaccines, drugs, hospitals and doctors. There is no specific medicine available, say Doctors. Vaccines are also not fully available in India. Symptomatic treatment is what they can give depending on cough or high-grade fever. Treatments are depending on the quantum of exposure, virulence of the virus and the person’s resistance. Though India is reportedly developing a vaccine, current treatment is to administer neuraminidase (a viral protein that helps release new virus particles from the host human cell) inhibitors, oseltamivir (Tamiflu) and zanamivir. Since Tamiflu manufacturer Roche has no product patent on the drug in India, there are no legal hurdles for Indian companies to make a generic version of the drug. Other nations, too, are looking at making the drug as the WTO, in 2003, has allowed governments to overrule patents during health crises.

India has banned imports of poultry and poultry products from infected countries. Government set up border check posts and posted quarantine officers at airports. Meat-sellers hope that the avian visitors won’t upset business. So far no virus has been reported even among the birds, and World Health Organization has given a thumbs-up to India’s preparedness. Still, keep your fingers crossed.
Posted by Jeevan at 6:10 pm

Nice post Jeevan and very informative. I am glad the Indian Govt is taking steps to take care of this dangerous virus.

Its a big topic in the US here these days. Newsweek carried a cover story on Bird Flu 2 weeks back. I read it and found it interesting and scary.

I hope all countries will have a decent stockpile of flu vaccine in hand...when this hits.

Venkitu sir – Thanks Friend. Very happy to see the fast action by government on Bird Flu. Indonesia, Vietnam and Thailand are most affecting country’s.

Hope India will soon found a Vaccine for Bird fly.

I fear of Vadanthangal Bird sanctuary (near chennai), because winter season is coming closer, many foreign country birds will come, who know they can also carry the Virus. I appreciate the government’s action on it.

Prasanna – Thanks friend. I took it from Magazine.

Oh, you make me nostalgic Jeevan :-)
I went to USA to work for a vaccine for Bird Flu, but came back without it :-(

But very nice and informative.

Suman - It's very nice you have tryed to research a Vaccine for Bird Flu. Thanks Friend.

Hey, you sure have a nice site here with some very interesting stuff. I have already bookmarked it.

It's a shame I spend so much time blog surfing that I often forget my own. Crazy me. :) But its so addictive and fun.

Anyway, a lot of people are trying to make cash online nowadays, so I thought I'd help you out with a site that has some great tools.

avian flu mask nano
Not bad to sit around doing nothing while your bank balance keeps growing. :)