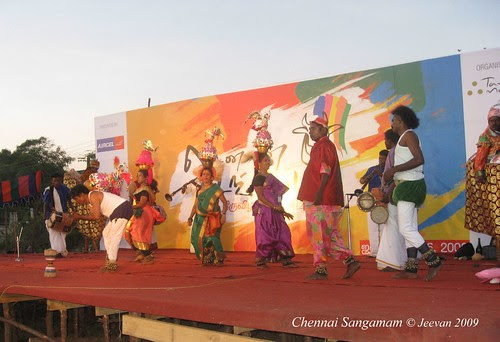 Before proceeding, just put on the current song at side bar, can give some feel. hehe…
The festival season is around, to indicate and by adding sugar, began this Chennai Sangamam – the traditional Tamil classic folk dance and music open festival. After successful two years of beginning, this festival ideal to develop the declining rural arts, the concept which was appreciated by everyone, that exhibits our own tradition and culture. The Chennai Sangamam 2009, which inaugurated on 10the January exists at many places around Chennai, stimulates the festival mood. In welcoming Pongal – the harvesting festival that falls on January 14th, this celebration gives a feel of nearly in traditional way. What this arts turn to be only temple festivals special in villages, which seen rarely in today’s world, this truly aware the need and significance of our unique arts. The idea comes out in supporting and raising the declining artists, and helps in discovering certain norms in public. Year by year I could think its popularity and we all began to look forward this festival around. In my view it has a bright future not alone being celebrated, and to make our existing arts to keep in active and some more in spreading to other districts, could certainly witness a growth.
Being in same city and knowing this festival, I could not make it a visit in past. But I had an interest and wish to watch those programs, which happens to be a distance vision. I get to know this time that one of the festivals open stage was setup near our familiar beach site in Palavakkam, which I happen to witness on Sunday. Well in advance took the cam in hope to see the festival sometime, it was rural beats welcomes at unexpected site to sight the festival near. I wonder to see a tall man, just walking around standing on high wood legs casually. Putting his long foot steps sounds like moving hooves… attracts. By the time we arrived, get to watch Karagattam and Poikkal Kudirai aattam, something unreal in memories so far; Kavadi aattam and Tamil folk songs singed by rural artist. It was a wonderful sense, shivering to glimpse those Tamil rural folk dance and music. We must praise those artists come across to remain our traditional style, to make us think why don’t we make it to core than sending them to verge, welcoming only western culture. It’s a pleasing feeling where no were in world has such rich and varies performing genre within a state. I think there are lots of art performances to get on stage till the festival concludes, and I hope to catch some more in coming days if possible. I know everyday there are different folk dances and music to take place, and along they conduct traditional food festival to taste the forgotten or strange. Just a day left for Pongal, there was lot of enthusiasm about the festivals, and the cymbal of Chennai Sangamam emits our sense along. 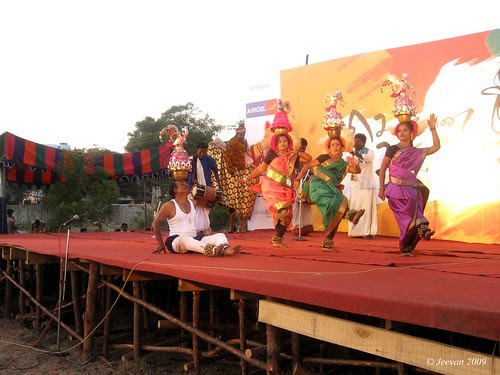 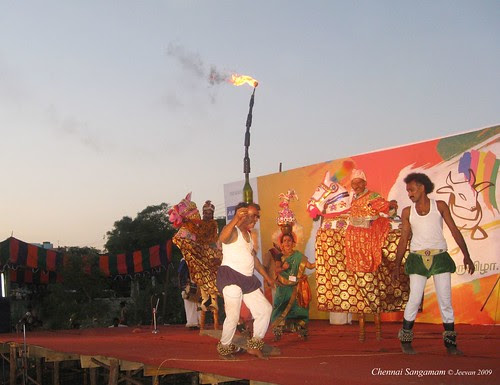 Karagattam was familiarly known by most, as they take places first and more in festivals and cultural programs. Karagam is mean to decorated vessel. So as one have to perform dance movements, placing them on head without let to fall the vessel. It’s uneasy to see how stable the vessel on head, to only active the body more or less towards music. Have seen this kind of dance in movies alone, and the one ever get out of mind is famous Tamil movie Karagattakaran (karagam dancer). The current song is Mankuyile poongkuyile... from Karagattakaran, do check for the karagattam. 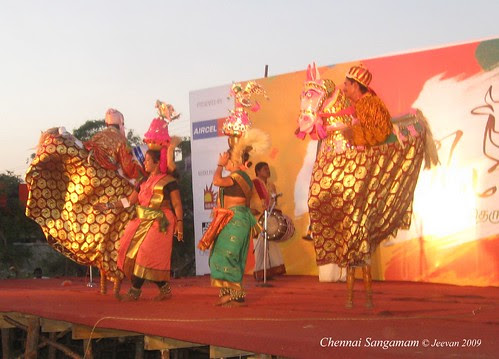 Poikkal Kudirai Attam (Dummy horse dance) is a skill trained performance. It’s wonderful to see someone standing and balancing on two pieces of wooden legs, and caring a dummy horse on hip to move up and down to band music. Wearing colorful cloths hiding there legs, and wooden legs to hoof. It is unheard in the raised band music; called Naiyandi melam. 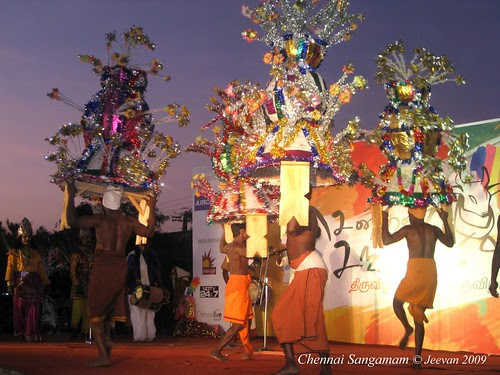 Kavadi attam is a devotional dance dedicated mostly to lord muruga. Unlike those carried on shoulders balanced by a stick and something curved like with fixed feathers on each end, what I see last evening was a stool like thing carried on head with a cone like decorated, as they roll, it revolves colorfully. 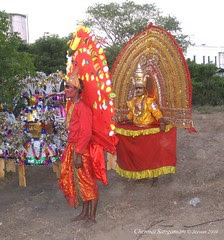 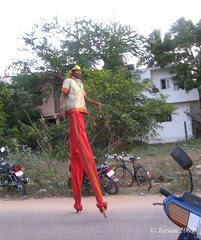 More pictures here in flickr
Posted by Jeevan at 5:53 am

So colourful festival,and so refreshing to read this, my dear

Yesterday we had the Ayyappa Pooja here...and Kavadi attam is the Tamil contribution...I was watching it last evening...and to see it here today is very surprising :)

one of my favourite songs and I keep humming it often...a construction labourer -- Suresh -- taught me the lyrics in 1991 :)

those songs, which i stay in me for long...Vaidehi Kathirunnu, has one set of good songs...many many more..while I have not watched many Tamil movies; tamil songs have definitely gone into me :)

I just miss all those times and festivities...

Would wish to see them all through your blog !!

Jeevan makes me want to be there.So colorful and happy.I miss all those festivities also.wish I was there.

Devika – Thank you so much dear. So nice to know, u too where watching something similar :) those are songs stable forever green to listen and carries much real! Wish you Happy Pongals :)

Kavi – Thanks buddy, glad to show u those pictures. Happy pongals to you :)

Starry – Thanks dear, with u too happy pongal :)

very colourful indeed..unfortunately had to miss it this year..im in madras tomorrow..let me see if I can catch some of it

I remember the Sangamam coming to my University two years back,was an enjoyable experience :)

Thanks for post this informative. I'm a long time reader but ive never commented till now.