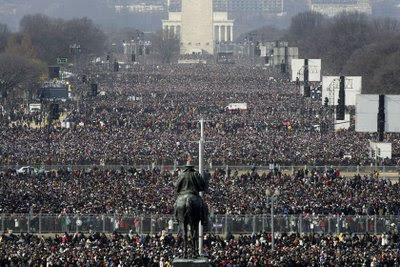 After the serial time is over at home by 10pm, I turn around channels usually until settle down to sleep. Last night alike I come across sun news to know live from Washington dc on Obama’s presidential inauguration, so I turn to CNN’s live for detail view. It was such amazing ceremony I have seen ever, people with hope and spirit, welcoming a new dawn calling Obama... across the massive crowds standing for miles. With more patience, the simple Obama disclose to the cheering crowd, without any excitement visage creating a history, but much said his hopeful speech after taking oath as 44th US president. Every time he says us, it would inspire people to work towards the achievement in challenge. Of course I could not understand the whole speech of Obama, unlike others. His memory ability wonders through the speech. Thanks CNN for collecting the important pieces under screen.
I just thought how fine those gentlemen are in maintaining the political gesture. The republican too come across the defeat and support the new govern by wishing. I really felt ones listening to presidential hopeful of republic McCain’ speech, that our Indian leaders have to learn from him how to congratulate the winner and acknowledge the true victory and not blame the others for losing and express distress that people chose a wrong person or govern to rule. Something I loved from American politics! Between the violins music by John Williams ‘Simple Gifts’ the inauguration pleasing.
Posted by Jeevan at 1:02 am

Absolutely Jeevan,
American democracy offers much to learn for India...

But then the mindsets of people are so different, so is the political will...

Nice reading this post, dear..I feel Obama means and implements the change that Americans and the world looks forward...

The inauguration was so hopeful and spirited

The world is full of hope - it's a great feeling :D

I enjoyed reading your blog. I'm from Canada, and a new blogger!!! I'm really amazed at how many tamil people are blogging on the net. To be honest, you tamil Indians are so DAMN SMART! i love how you guys write english!!!!

i haven't seen telecast but had read his speech transcript. it was well written.

A change has arrived....

I watched this historical ceremony and I was upon impressed too.

Can you imagine such massive crowds, cold weather and probably nobody (TV news) was injured, no police intervention?