Murugan who has the name of Tamil god Muruga is like god for hundreds of children. His face may look familiar, but naturally he is an oddity. The 24-year-old autorickshow driver is one of a popular person in Kochi, our neighbor state Kerala. What makes him so popular is on the mission he is walking to stop the child labors and help orphaned street children to lead a courtly life.

Murugan used to scan for the children working in shops and begging for living while on his way driving through encumber streets. On this way he has rescued more than 2,000 children from different parts of the city for over past six years. As soon he found them, he lodge a complaint with the nearest police station with there photograph. We think what turns him on this behalf? He itself has a story on it. 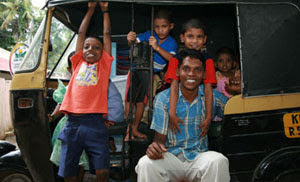 Murugan belong to a poor family native to Tamil Nadu and moved to Idukki district of Kerala where he born. The family was happy with the labor at plantation, but their world turns upside-down when murugan’s father left the family in search of another job. At the time the 4-old murugan was enlist to an English-medium school by her mother, but hopes crashed when she couldn’t afford the free. Later on the move to the local school where his only interest was at mid-day meal. After moving to Kochi with his father as a head-load worker life was no diverge, but he was denied for schooling as he doesn’t know Malayalam. This lead his life to rag-picking and the hunger was the big problem when they never know from where the next meal would come, but they finally ended before the bakeries in city closed were they dump the leftovers at a place.

His life had little bright when he was landed in Sneha Bhavan an orphanage run by Don Bosco congregant. After 6-year of learning carpentry there, he was shifted to another orphanage by the time he was 14. Then came the turning point, were Sneha Bhavan’s director asked him to work as a volunteer for ChildLines, an NGO for poor and orphaned children, on a salary of Rs750 a month. Dividing his times between working for child line and driving an auto that was brought in 2002 with the help of few friends and director. Soon he learnt more about child rights; he started complaining against people employing children. This invites to distort the people including police to reprimand him. As his fight against child labor continues, he starts his own NGO of street workers association and become critical of orphanages. In the last few years Murugan has been playing an important role in rescuing children, esp. those works in hazardous industries. Murugan voiced on orphanages, that only giving food and shelter is not enough, they need empower.
Posted by Jeevan at 3:40 am

wow
what can i say?
he is simply GREAT
May god bless him

An absolute humanist.
Many a times, it has occurred to me that i should do something, when i see children working in hotels.

It only occurred, for i took no action. Murugan has taken that extra step.

MAY GOD BLESS HIM!!

A nice thought to bring out this.

What an honor to have such a great mind to seek freedom for children. Money alone cannot win, its the mind and determination to win make shim prove strong enuf to win the society.

Hats off to u for posting a good article.

WELL ONLY ANGELS DO THAT SORT OF THING!

Nice to know about Murugan. These kind of people are very far and very very few today. Its because of them that our society is still marching ahead. Thanks for sharing with us about him and his efforts!

such humanitarians are rare in this world, my best wishes to him!. do u know him personally?.

Barbi – yes that occurred to me too, but without any details about how to handle the situation we can’t do any. It also hesitate weather to face any difficult. We should be happy at least some one like Murugan is helping.

Kaylee – Welcome here:) Thank you. I wish for you surgery dear, take care & don’t worry. Our prayer is here.

Kalyan – many need to aware from him, I am glad to write about him.

Shuuro – no buddy, I got to know about him through The-week.

Thank you for sharing this article. Take care.

Glad to know about such youngsters. So nice of you to have brought it to our knowledge through your post. Keep it up! Expose such good people to the world. Let more Murugans come up!