Today I wanted to do something new for the Independence Day. Just now tied the flag at gateway and came to post the national anthem that I make in my keyboard. This song was originally composed in Bengali by Rabindranath Tagore and was adopted to Hindi version by the Constituent Assembly as the National Anthem of India on 24 January 1950.

As I don’t know how to connect the keyboard with computer, I have recorded the music with the headphone mike, so it may not sound that much good, but it feel better. Now days I used to sit with keyboard for sometimes more to make enthusiastic on the songs with my hands. I like to play many songs, but being away from the touch, it’s taking time to practice. I wanted to do this song and tried for hours late day.
Song : Jana gana mana… (national anthem)
Player : Jeevan
Instrument: Keyboard 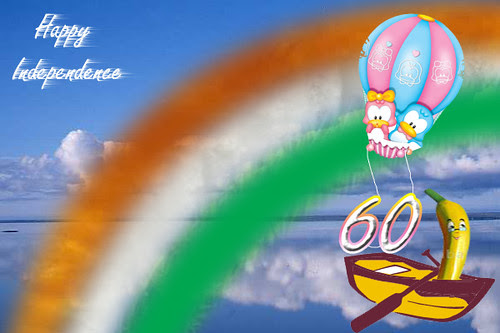 I have changed my blog address. You can visit there!

Good Job and wishing you the same. A great hobby is music isn't it.

Tis is a great job, Jeevan! Love your idea and job!
I wish you
and to All Indians in the world

Balar – Same to u friend.

Kalyan – thanks so much! I know buddy, it makes difficult to maintain over 2, 3 blogs. Happy Independence.

Krystyna – Thanks for you wishes to all Indians!!

Heard it again and the thought remains the same.... u play really well

alok - Thank for the encourage buddy:)