Is how to treat a woman? 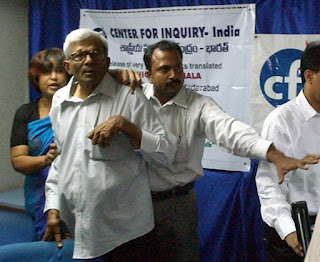 It was shocking and shameful to see even these happen in our nation at the time of celebrating 60th year of Independence. India faced many women for illegal acts, but considering as women we treated them with manner, but how dare it was to attack a woman for her free thoughts. Even it can’t be dismiss if the attack was reason for religion or any other issue it may, to attack an innocent women that too a public proxy (MLA) was becoming a caption for this is mess to mess.

You already got it right; the woman was the Bangladesh writer Taslima Nasrin. Taslima who was now in India as a refuge to save her life from a group of Muslims in Bangladesh when they decided to kill her for independent thoughts. She was earlier to Hyderabad for her book release, where a group of Majlis-e-Ittehadul Muslimeen head by legislators round up the hall to shout against her and moved inside at the end of the press meet and started to attack her to hurt. She was escaped with little wound in head, when the anger people throw whatever they found.

We should thankful for the journalist and program organizers to safely get her away from the violence group. Is that the manner we treat a person who comes with a hope on us and our democracy. It was disgrace that there was no secure for this press meet, even when there was protest for her near the place. Will the government take response for this attack to punish the legislatures and others or it will be an eye wash to left them away like most of the times.

The video of the Incident.
Posted by Jeevan at 3:46 am

It is a real shame. Sadly, all MLAs got bail soon after they were arrested. What bothers me most is, none said anything, when these MLAs threatened to behead her, if she visits hyderabad again.

have been reading ur posts for the last 1/2 an hr and i find so much life and passion here, an iota of which i need to lend for my self

and for this post, i read it and was deeply saddended by the incident ... more than a woman it is atttacking our fundamental right to express our opinion and if anyone is hurt the right course of action is the judiciary and not take matters in ur own hands

there is no respect in this world for independent free thinking women nanba. the moment men see a woman able to be independent that automatic self supremacy tendencies starts to creep up. such a shameful incident and whats worst is that it's done because of religious bias and extremist...now we know which religion tries and tried to domesticate a womans role to be a part of house 'appliance' rather that another person. hope we all dont sink to that low with this kind of behavior, have some heart.

this is not the end to the shameful event...Hyderabad police have issued arrest warrent to Taslima for hurting religious sentiments!!!

Often I ask - Why?
Why people like to be so intolerance, cruel, without heart. Where is love? Thanks for this post.
P.S.
Thank you so much for your visit and for your kind, friendly support words. It is very hard time for me and for my son and his beloveds. Today, my lovely grandson Kevin starts to get chemotherapy. It was very hard decision. One day can change all life. Three days before we were so happy. Now, we are full of scared and helpless.

its sad...the descrimination...racism... just the exclusion and attacks of others... lets hope it changes some time or other...

You are absolutely right Jeevan. In our 60th year of independence it was a gross shameless act by a group of hypocrites. They think this country is also like our neighboring countries and can do anything here. On of the main faults is our political establishment who nurtures them. In todays newspapers I read a complaint has been immidiately lodged against Taslima for her remarks before, and for the hypocrites who attacked her are still moving free and a go slow attitude has been taken.

Hi, informative write up you have here. Will visit again. Take care.

Thooya – but they won’t feel it.

Shuuro – the influence and power are only done in for supporting illegal act, not any use for public.

Alok – welcome here :) nice to see u. Thanks for spending in my blog. I agree, if there was any affect on there side they can go with law order, but they know nothing works there, so they jumped on. How they get to hurt another life like us, won’t they feel her suffer?

Balar – hum… they should feel that.

GP – the world need to come out by seeing women as an inferior in everything. If the Indian people are willing for men-women equalization, why the govt. can’t give the just 33% of reservation, because still there are people expecting women to be under men. They not even have a common manner how to behave with women; these people are politicians who care society.

Ashok – I too read about it. What worst is the police are in pause of arresting the group and legislature.

Krystyna – Its all in how they have grown. We have to be strong now friend, praying for you loving grandson to be cured soon. No way, we have to accept whatever happens, we are now in empty hands. Its sorrow me too dear, let’s wish on doctors. Hugssss.

Preethi – anger kept the mind behind. Welcome back to blogging dear:)

Kalyan – knowing what has happen in bad and illegal, but the politics was eye closed for their support. Taking neighbors is very cruel before our country… killing dozens at a time, when we think for long to put one in sentence.

Venus66 – you are always welcome. Thanks.

Taslima is quoted in the media as saying,if it were not for the media persons at the venue, she wouldn't have returned alive to Kolkata.

i too condemn this attach! its stupid ity!

Our Nation is respected for its way of welcoming people (veerunthombal) from other places. I felt very proud to be an Indian especially for this.

But, by the thing you pointed out, Iam feeling very sad about this.

If such things continue, I dont know where it is going to end.... what will happen.....