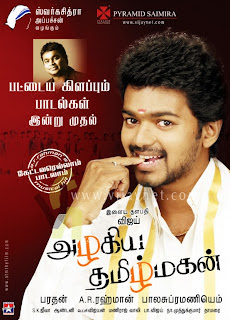 Weekly there would be an audio release of some films, but sometimes only their were huge fans waiting(like me) and that album was expected in a manner. Azhagiya Tamilzh Magan is the year’s best songs holder. Curious is the Vijay, Rahman combination to a beautifully named film where listeners can sing for sure. It’s A.R.Rahman’s second attempt in Tamil this year, after the grand success of Shivaji. After listing the album I felt the release must be done near pongal times where it has something related to Tamils famous and traditions. This film has VIJAY and SHRIYA as Tamil magan and magal (hero and heroine). Here we look short things about the album.
Ellappugazhum… an unusual open song for Vijay. "Munnal Munnal vaada unnal Mudiyum thozhaa (Come forward, you can do it friend); Ellapugazum oruvankea ne nathipola odikonderu (all praise are for one, u just run continuously like river); anbu thalaiva vetri nameke azhagiya tamil magan neethane (dear leader, victory for us, you are the beautiful tamil son)" where some inspiring lines from Vaali is a attracting song for the film. Rahman singed it, where it was the vaali`s song he is singed after New York nagaram and Athiradi kaaran. Especially this song doesn’t carry the useless and stupid lyrics what disappoint in all Vijay’s intro song.

Ponmagal Vandaal... is an remix, but I feel its recreation. Because only taking the lyrics, they used a fabulous vocal from aslam a new singer. I kept listening to his section much and the rap track in between was too good, if it comes alone could well attract, but I feel it didn’t combine with the super hit classic. I like more the beats behind the classic ponmagal vandal porul codi thanthaal….

There are some stylish lyrics by na.muthukumar! in Nee Marilyn Monroe cloning ha…. Jenifer lopes Oda scanning’a... In first time listening itself we can guess it`s a hot song by actress namitha and I thought it was sung by rahman through the song trailer in some place, but really it was singed by benny dayal and ujjayinee, a rocking voice. More cool and colorful the lines came out where it goes like ”Can u come as my girlfriend for a day, Saturday night, can we go to a party are u coming; women’s are the cricket, men`s are the wicket.”

Maduraiku Pogadhadi... the lyrics of pa.vijay start with praising Shriya. Beginning with the city of growing Tamil, where the lines go like "Maduraiku Pogadhadi anga Mallippoo kanavaikum (don’t go to Madurai, where jasmines may put eyes); Thanjavur Pogadhadi Thalayatum Bommai Nikkum(don’t go to Tanjavur, where head shaking dolls will stand); enkum pogamatten un munnalathan nipen munnal vanthu nenu en kanala sokka vaipen (I won’t go any where, will stand before you, stand and faint you with my eyes)." Really a wonderful folk song! I don’t, but it was the first song I used to listen in the whole album. I think it must be a welcome song for the newly marred hero and heroine. About the singers, I feel enthusiastic in there performance. It was benny dayal, archith, dharshana very new arrival with beautiful voices.
Posted by Jeevan at 5:54 am

Theres one tamil movie that I am looking forward to and that is Mirugam starring Padmapriya and a hero whose name I dont know!!

The stills look kinda deadly, and with the slapping incident hitting the headlines the whole movie seems deadlier that ever!!

dat was a nice review about the songs. i dont like shriya (sorry). but after seeing ur post i want to see dat song "Maduraiku Pogadhadi".

audio has been released? whoa!!!

Guess I will wait to watch the songs first.. sounds good to me.. nicely written

songs sound good...will the movie be? We shall wait n c bro.

lovely reading the review of the songs. I feel I could have listened to them.

Velu (mm) – I am not looking for that film, no idea will I watch it even. I like to watch ATM.

Kalai – Thank you friend. I too what to see the videos of the songs, hope it doesn’t disappoint.

Deepa – Thank you, please welcome :) I am waiting too.

GP – you are right buddy.

Keshi – you said sometimes back that u like vijay. He is super;)

Kalyan – Thank you buddy. U can listen, music was good.