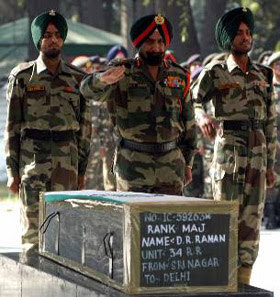 “Don’t leave any terrorist to escape” these are the last words said by the major D.R.Raman of Chennai who lose his life in the gun-battle with terrorists at Tangmarg area of North Kashmir on third October. Another army major K.P. Vinay was also died in the battle. D.R.Raman and K.P.Vinay are friends from the time of learning in Army campus and working so close in army. The didn’t die just to die, they destroyed nine terrorist before falling; that too Raman lost life went to save his injured friend. It’s the fire between terrorist and army; actually it’s the love between Vinay and Raman that took away both of them at same from us. Vinay was to be a bride-groom this month end and he was distributing the invitation to all till before the day he was killed and Raman was newly wed and was to hold a child in few months.

I was touched by this when knowing through paper. We not even know there face, they may be one in the thousands, but they lost there life for our security. When I was thinking, I felt they are very special to us, as any one would really be ready to leave there life for others, but what they did for country is a best service in all. Even at the stage of fighting for life, Raman has encourages his other colleagues showing his hand to the winning mark and voiced in brave do not leave any one. The loss is not for there family or for Kashmir, its nation’s loss. The every step by soldiers at every corner of the boarders and inland is prevention for big happening strikes for our lives. A true sacrifice for them to there mother country, we keep on saluting and respecting their unexpected and reasoned loss.
Posted by Jeevan at 2:12 am

Just touched my heart and we should be proud of them. We see people run to make life better for money and being selfish in their own world.
Its such a great honor to know they lived .. well, will still live in all our minds being a great soldiers.

Hats of to them and my deep condolences to their families.

It's good fete that u wrote abt those 2 national heros here! I didn't realise their valor when I gazed thru the newspapers last week!

Feeling very sorry about this. Yes, its a nation's loss. I can feel it as my father was an Army man. He used to say many things like this. Really, soldiers who are guarding us in the borders not knowing of what will happen in the next minute are really great. We are just nothing in front of them not even the politicians. Iam sorry to say this.

The friendship was really great. Actually, Army is a place where many different people with different culture move like a family. Even when they are in the death end, they will enjoy it. They feel very proud to sacrifice for our Nation.

We can pray to God to make their soul rest in peace & also let their family tolerate this. God please save them....

my humble prayers for the warriors!

Bravery at its best!

I read about this and felt very emotional. I was also about to write about this. They both should be great. I was stunned by the salute of Raman's father. He being an Ex-service man has felt proud that his son died for the country. His sister is with the Naval force. The whole family is dedicated to the country's defense. Hats off to his Dad! Let us all pray for the departed souls to rest in peace. It was also sad to hear that Raman's wife is carrying. Just imagine the child. The child has so much of sorrow already waiting. The child may not know anything. I bet, the child will grow up to be a wonderful person and be very useful to everyone around him.

Kalai – you no need to sorry for this, politicians are there to glance the peoples problem(they also need a security), they save the people by risking their life. That was a lovely story about those friend, thanks for share friend. let we pray to their family to have strength to accept there lose.

Ammu – I wish your prayer to reach them.

Balaji - Like his grandfather said I wish the child follows his dad’s way and do best service to nation and to all. We should be thankful for the service they gave to us.