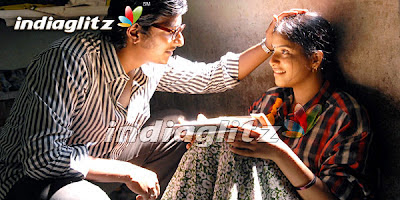 A person’s anger on society and himself is a line story of Learned Tamil (Kattradhu Tamil). Much of the life of Prabakar(Jeeva’s character name) was told in flashback to a media’s camera, then was to be followed. In the name itself we can understand this is a film about Tamil’s stand in today’s world, where the character was made to be in love on Tamil who took a carrier in Tamil language. Strike again strike in his life, in where he was emotionally hurt by then uncontrollable of his emotions makes he so harsh. The harsh person has a soft side in; it was her childhood sweetheart Anandi. It was a girl who may comes across in a life, everyone’s life a feel between love and friend. The acting was to be praised; there was a scene where waiting to get her father body from mortuary is innate and the continuing faces are loveable as well tiredness.
In this film the hero not talked, his character spoken, then u may know the actor’s performance. The small age prabakar was done fantastic acting; this small boy carries the fear in eyes, love in heart. His practice with Tamil teacher, and the continue of the song Para para pattaampoochi… get an envy that we dint get a teacher like him, the whole thing of that was like flying butterflies. Music by Yuvan has little shadow of Raam’s feel, but the picturesque are new to eyes. The dance on the foot level water in river, the landslide of droughty hills and the ride on curve roads, the breezy green hill top are break giving (a brake from usual). If you smile ones, it’s the meaning of my life… I adore this song and lines, the happiness in small movements. The Director Ram has come to tell in emotion the love, error and practice of living. The accident scene is one that taken from real life of hitting the standing vehicle that we hear often.

I concern the concept more in the character’s distress where the computer related graduates gain more money and value in society and other fields of Tamil, History, (Agriculture is too my opinion) are looked value less. The film describes the disgrace on a Tamil educator who takes it on his wish against that high scored must do only engineering and medical. And what about the low grade students and who lack to support higher studies doing today are running behind values. I am not going to support the attack on the specific area of computers, call centers or anything, but the truth is those areas are more valued in world other than a degree holder. Where one of my friend finished B.sc last year in a poor situation of his family and looked for the job on his education to lift the family, who was also do computer better was forced to work in a vest and brief garment factory in Tirupur.

I am not truly agreed on the concept that computers are only developed area, but computers occupied on every area, the technology well prepared for every one to use. What ever we say, the money values more than the wish. I was put on thought on my area of agriculture, where most of today’s computer fields like, IT, BPO, Call Centers, Engineering collages are on the lands of agriculture, for today’s value we lose the future value. And the film has a side of slope is, getting anger on the impossibility. I feel it’s a bad signal for society, because every ones life was decided by their own desire and none pushes. It was a subject that we are not like others, enjoying the life on multi complex, cellular, flying aboard earning more… it was the mental attitude that one experience of getting no respect and price for a degree course. I feel the people select there field not on the wish, but on the value. Once there was the time where working in government had a value and states, but today software engineer has a value in specific. I am not talking against the IT’s, but we need all areas to be specific. I remember that line, “only one part of our body grows is not the growth, it should be on whole body.” I don’t know how the director left the real estate area that is more money flowing place…
Posted by Jeevan at 12:20 pm

heard good reviews abt this movie. may be will watch one of these days.

jeevan, why not write review in tamil for tamil movies....?!
Thanks for good review. I wanted to see this!

its a good movie, i love the songs...must watch it soon.

I agree to what you stay, computer are only tools, life is more exciting than being labeled as a computer country.

never seen this movie...but i do agree that IT is not just for developed area but for all! we all need to progress but in the same time we need to preserve what's valuable to me from the past.

i totally agree with wat u said about the fields.... u r exactly right....

Jeevan thanks for the review , think I would like to watch this movie.

Your review is very, very beautiful and I can see what you're writing.
Thanks, Jeevan!

During my break time I'll be visiting you, you are the best!

What an amazing song "Love birds".

Nirek – i want all to know about this film that why buddy :) go and watch, but u need time to move.

GP – have a good time on watching bro. I agree too… the computer energy is fully used in cities only.

Elween – nice to have u here :) I don’t know u could understand if u watch this movie. yes, every think must see in equal values.

Kalai – Thank you friend. Then have a good time at watching sometime… Happy Saraswati and Ayudha puja.

Starry – Thank you! I wish u watch.

Krystyna – Thank you so much dear. I am glad to have your glance in the break times too :) thanks for checking the song, it was an hit song from a beautiful lady. Take care Hugsss.

Keshi – do it dear. I wish you have nice times on weekend :)

Very nice review...Heard the songs and liked them a lot :) Ur view abt computer fields are so damn true! Great writing!

Hi Jeevan,
I am using your Pongal Panai Photo in my post. I think you don't mind using your photo. Thanks for the Photo.

I hope u had a good weekend too Jeevan!

Ponnarasi – Thanks u so much :) yes the song are very nice and as well the film was too good.

Ramya – Thank you, have a nice watching :)

Keshi – yes dear. it was a very good weekend.

Hi jeevan,
Thanks for the picture, today I posted it...