If there’s a historic building creating history every day through its judgement could be the Madras High Court, alike the Bombay and Calcutta High Courts began at a stretch. Apart sentence the high court has become a tool to mend social issues and judges being prudent themselves have come lent some remarkable judgements making as significant as history. 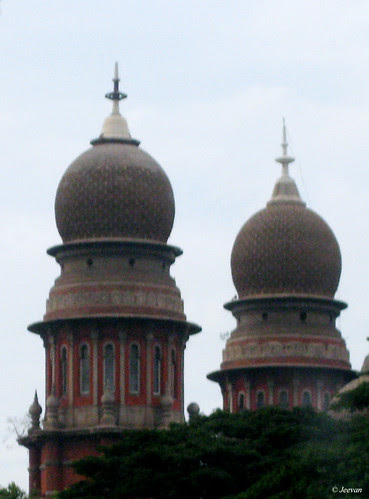 (Domes of Madras High Court)
Established at the premises where the current Chennai Collectorate located by letter patent by Queen Victoria under the authority of the British parliament’s Indian High Courts Act 1862, shifted to the present High Court building in 1892 after 4 years of the constructed building at cost of Rs.12, 98,163. Build in an exquisite Indo Saracenic style, the building was opened by his Excellency the Right Hon’ble Beilly Baron Wenock, is acknowledged in all aspects as finest High Court building in the India.

The High Court premises also had a light house which was begin used to warn and guide the ships, thus become the third lighthouse of Madras, functioning from the tallest dome of the Madras High Court at a height of 160-ft. Being target by German Warship S.M.S. Emden in year 1915, a number of explosive shells where sent on Madras City aiming the dome were struck the cornice around the flooring of the light.

During the Second World War, when madras came under attack by a squad of bombing aeroplanes at the early hours of April 6, 1942, the High court went on a long vacation ahead its usual date due to possibility of strike, runs the vacation courts run in Coimbatore and later functioning from Holy Angels School in T.Nagar before go back to today’s High Court building. 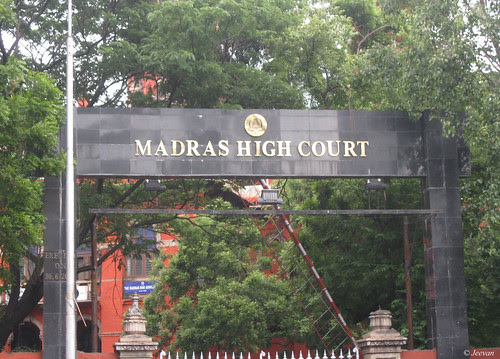 The Madras High Court starts its celebration of 150 year of establishment from today till next year beginning and I though to write on it with information collected though wiki and other link sources. The photos were taken by me some time ago.
Posted by Jeevan at 3:59 am

Nice reading about it and lovely captures of the building too!

Thank you for the info.

Interesting information. I didnt know this ! Thank you

Wonderful architecture. I have passed through this area many times without a camera in my hand.

I was not aware so much about the Madras High Court. Very nice and informative post.