Mobiles only outside campus 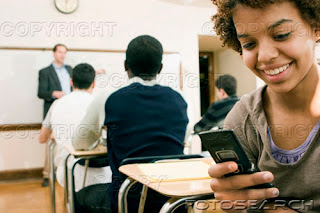 In last years the topic of using mobiles in collage raises, with some misuse many universities come to pass order on banning it esp. those with camera. Now the state government on its way to ban cell phones use in schools, which was in fore by school officials already. For using and none using the students, parents and teachers tells varies reasons, but to correct the recent change in life that some end in misuse, the necessary on ban is must in preliminary warning. Except misuse, the mobile disturbs student’s studies while always smsing and playing games the mind diffuse to concentrate on subjects. If students can afford a mobiles, it won’t surprise if teachers own, but they need to be paragon to others avoiding mobiles in class hours or leave it at staff rooms.
There where times when students bring hand video games, trump cards to school hiding inside there bags and play while class was running and in brake times. Then caught by teachers and struggle to get back the thing or pay fine. Haven’t there days moved without cell phones, students never left home without it, no tuition, special class or extra-curricular activities went. Then why we want students to get confused with cell today. Technological gadgets are useful in many way, we have to see what’s necessary at the time and aware of both positive and negative sides of it. I was trying some online games for my cousin in his holidays, keeping him at my side. When he sees something colorful with cars, funny ads, graphic games he just want to check them; I don’t know how to make him understand his innocent on net. Who know what’s behind a click, where it goes. Some ads giving a sign of wrong thing that some may go to abuse sites, it was shocking to know the online games has vulgar characters. I don’t know why I am telling this, but like this some students not aware of another side of cell phones. There are many infringer minds out there without our knowledge; those hands may pull them to land in difference that’s very strange.

In my schools days the cell phone haven’t reach that much, and where not even allowed to tie watch and allowed only from higher class. If any urgent call have to made, with the help of school staffs we can do it. If parents comes late to pickup or any other changes in routine of school time teachers used to call our home from office telephone to contact parents. We feel like being in safe hand till leaving school campus. Ones they practiced with mobiles, they addicted to it, wanted to connect with friends always. Even today’s kids want cell phones; they know everything where elders learn from them. Phones with cam are like adding sugar to taste, it go around through good, bad pics scenes for fun. There was a question only for some doing wrong thing with phone why should it affect others using usefully. School is something pubic to all, just giving excuses to one or two will bring difference in unity, whatever needed must be followed with teachers and officials alone.
Posted by Jeevan at 6:07 am

Very true... this is something like a "necessary evil".. the necessary part takes a backseat... resulting in so much chaos and confusion and varied opinions

Jeevan you have been given an award.check out my blog.

Yes, usage of mobiles by school kids should be restricted seriously. u explained the damage it causes when it falls under innocent hands. u r exactly right.

Parents should think abot it. They are thinking that their kids having mobiles is like great pride to them. But its not.... They never see another side of it. As u said, its diverting their mind from their concentration, ambition, etc. resulting in loss of their future...

But many parents think when their kids are staying in hostel, they can contact them at any time. This is its main advantage. By this they feel they are living with their kids & vice versa.

Wat u said abot that sites, is exactly true... Even i feel very nervous when i happend to get any informations about my official work. It causes lots of inconvenience to us. Wat happens if any innocent kid watching it? Oh god, dont know where the world is going... Technology, in one way its good, in another way its spoiling our mind...

I agree with everything u said here Jeevan. Technology is wrecking childhoods and even making us humans just button-pushing idiots. Im sick of seeing even lil babies carrying mobiles!

I hate the idea of children carrying mobiles when they are dropped and picked up by parents, and the school bus or van. There is no need for them to contact, and in case of emergency, they can be contacted through school. Parents should come forward. Most of the schools here do not allow the kids to use their mobiles while at school. Only few ban them from bringing to school. It depends on the school head. Some schools have vaults for the kids, where the kids can place their mobile before classes and pick them up when they go home.

i agree if school children are nt allowed to bring hand phones to school, but banning it from higher institution like colleges/universities is a bit too much. i blv those in their tertiary level are old enough to handle their hand phone usage. technology is there for us to use, not for us to avoid.

Deepa – the expensive has becomes cheaper… where the evil wander freely.

Starry – Thanks for the award dear :)

Kalai – Thank you friend. true, the parents feel greatness of there children having cell phone… there is strong argument for the students staying in hostels using mobiles, this increases to attract parents by seeing some advertisement . Working on net need more care, we should be aware on what info we want to get, not just searching nothing to do and fall in bad sites.

Keshi - Just for entertainment along is not technology, its gift to use them and get advantage. Thank you.

Balaji – I agree. Then what for parents they, not checking there children. This is one idea that should be looked for leaving the mobile in office room and get back while leaving. The habit of using mobiles at young age can be proud, but it’s unnecessary at that age.

Ammu – yes technology is there for to use in proper manner.

With hitech and so many gadgets coming up, I think oneday ther will be no one on one human interaction at all.

Priya - who knows, anything can happen.