I have nothing much to write about the movie Naan Kadavul – the name portraits the picture, but there is no more reasonable thoughts there to declare someone as god. Keeping away my unbelief, the title has nothing to do with my interest on catching this movie, thus I believe in director Bala’s very unusual plot and showcasing an ever seen cinema. Going on up and down review about this movie, I went on my risk to watch the movie that could not satisfy my intension. But somehow it hurts and felt exotic, which we ever imagined or not. It’s all about an Aghori (ascetic) and oppressed disabled beggars, whom were involuntarily under a dominate underworld don. Those are beggars, uncommon that we meet at our street corners and traffic signals, but what we seen at the movie is crush, whether its certain or imagination is all up to director’s suspect.
Rudran, the main character rules up to expectation is lose in my views; no matter how hard work Arya done to observe the character, which I felt unconnected with others. I think the director must have something in mind, which I can’t understand or I don’t know. The movie is so realistic, where no computer graphics or backup is used. The characters have the distress in eyes and actions with much physical efforts. The abnormal position of arya is stunning, which is an adventure already through media; and except few differences most of his life process has been left blank is great disappoint. The mother sentiment doesn’t workout here, and no more his expressions is shared with others. 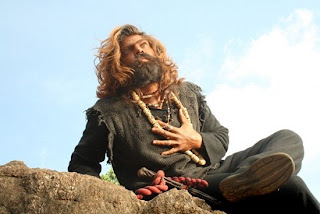 The odd disabled people and children got me disbelief. It’s much hater what’s happening under the ground and close up shots which fail to create sympathy, trembles at such deformity and cruelty happen around. But it was very different underworld someone has to imagine with reality, apart it disclose misshapes and unpleasant way of people sharing our world. Heroines get a chance to showcase there talent rarely in Tamil cinema, where Pooja got to perform excellent as a blind! More than any other characters, she impressed me. The boy who overcomes the target, laughs, and makes us laugh with his thought tempting jokes apart kick fake divines.

The busy life at Kasi bank and burning of masses showcases an idea about this place; and the reflection at Ganges of sun dawn and conclude is captured well in advance. It wonders why does director took this much time of 3 years to completer the movie, which could not run more than 2 hours. I feel the movie set into brief loses its head and tail, without a beginning or end, it concludes with lack of expectation. My advice is if you’re a fan of unusual cinema and been a brave heart, go and watch at your courage.
Posted by Jeevan at 6:57 am

but one can feel...//Rudran, the main character rules up to expectation is lose in my views; no matter how hard work Arya done to observe the character, which I felt unconnected with others//

thats the biggest let down. you have god among people, and how detached he is performing selective karma 'eating'. :)

but Bala minds is a miracle. Tamil movies are safe, for now atleast.

Thanks for this piece ! It helps !

You are right about the movie. You need courage to sit through this movie

Not sure if I will watch it... but excellent review.

been wantg to watch it

excellant review.Thanks, will have to see it.

I enjoyed read your review, Jeevan

Have you see the British Film 'Slumdog Millionaire' yet? The book is wonderful.

I would definitely watch it, Jeevan

Nice review, it prompts one to go and see...atleast I felt so, dear :)

PS: will mail you today.

am yet to watch this movie..

I gotta watch this one. tnxx Jeevan!

Jeevan u TC, be well and stay happy ok. HUGS I'll miss ya!

A cousin of mine has watched this movie but has refused to give me any details! I'm assuming it was a good watch?

GP – yes, they are some people in industry to keep the Tamil cinema moving from the commercial stupidity.
Thanks bro, it was unusual!.

Jeeves – sure dear. have u watched it?

Lakshmi – It’s a good movie to watch and the plot is such, keeping away my disappointments.

Starry – Thank you. hope u watch.

Annie – Thanks dear. not yet so, but wish to watch it soon.

Devika – its worth watching definitely dear. Thank you for ur encourage and support, hope it continues. :)

Resonator – go ahead sister. Thanks :)

Keshi – your last post made me worry dear. Hope u will be back soon, take care and clear anything confuse u. Hugss :)

Rakesh – Sure it’s a good film buddy, but an unusual one to watch at ur interest and risk!

It looks like you are a movie buff, and frequently blog about movies. These Picture Gallery Widgets would be a great addition to the movie reviews that you write.

To start just go to http://telugu-tamil-widget.blogspot.com/ Find the widget which you like. Click on Grab this widget and copy-paste the HTML scriptlet to your blog.

We hope you like them. Please send us any feedback on the widgets and help us improve the widgets further.