Been long update on my travel to Valparai, it’s so excite to remember the wonderful journey again by sharing with you all. 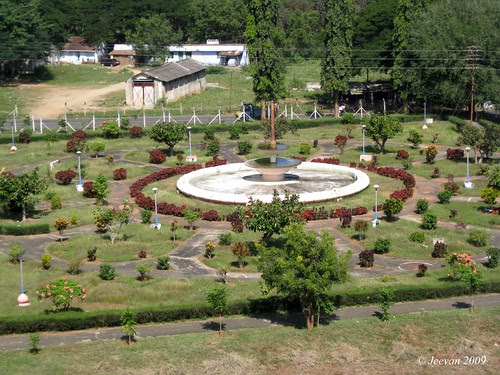 We moved from Pollachi guest house by 9 and reaching around 10am by Aliyar dam, fare on the widely unloaded road. We sight the hills faraway; surly can’t find the sign of a dam till reaching the curve bridge. It just located on the foothills of Valparai, so none can miss its existence. Few of our members climbed the many steps, and I am being using wheels, reached the terrace by taking the road end of the dam. I could really see what I seen through pictures via net. It’s a vast bank, goes like a C shape boundary of pathway. As soon reaching top, I could find a house remind me of some Tamil movies taken here. It’s called Chinna Thambi house, where the move was taken, and a famous political scene in Amaithi Padai was shot. The dam gives a panoramic view of the beautiful Western Ghats and largely extended reservoir, and the other side with green coconut groves until visible. 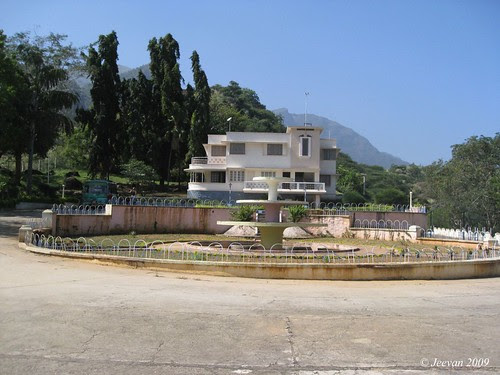 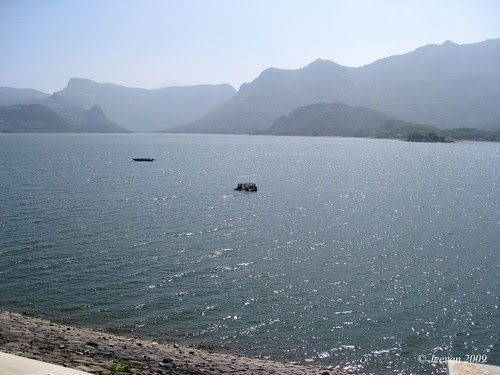 We moved some distance above dam, which could be stretched more than a couple of km to walk. As we proceed, the cool breeze blows on our face, holding the nature and its pleasure. Below the dam there was a small garden with a fountain - not sprinkling currently, an aquarium and a mini theme park. Seems like a boat ride is available in the dam, were we could fine some boats lonely floating in the reservoir To add some information, Aliyar dam is one of the longest in Asia, build in 1962, to store the waters collected throughout the hills of Anamalai range. It’s an important water source to Pollachi and its surrounding places, which extends till Erodu district. The water flows to this reservoir is from Upper Aliyar and Parambikulam dam in Kerala. Its wonder to know the water system and its connectivity through dams! There are more to go through dams further into this travel, and almost every link would conclude with Aliyar! 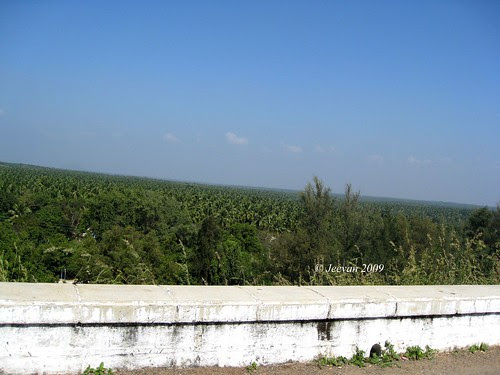 view of vast coconut groves
On the way before climbing ghat, we stopped at monkey falls. As the name refers, there are a lot of monkeys around this site, where our family members went to take shower in the falls. Meanwhile, me and driver bro parked the vehicle and waited, in time to get some nice entertainment from monkeys. As we watch, one monkey enters into a vehicle to steal something, was driven by we and there was a lovely scene of three monkeys sitting on a branch feeding each other. After the falls and a check post later, we encounter the first hairpin bend which continues like zigzag till 13-14 bends. At every bend we sighted different views of aliyar dam and far more, to stop at the 9th bend - lomes view, for more views. And where above the hill there, we sighted some Nilgiri thars, those rarely had seen. 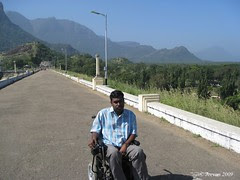 On the way, we stopped at AttaKatti to collect our lunch parcels in a small hotel, as we know it may take eventide to reach Valparai! At the end of the waterfall estate, we parked our SUV beside a private estate to have our lunch and I went little further around the place in wheels to view cluster of clouds striking the above tea gardens and hiding the homes. There was a board sign’s ‘mist spread zone’; and I wished to experience the cold within mist, but last only the cold breeze. Throughout the way it was scenic, to have clear visions of evergreen tea gardens, and far away hills surrounds with fog! On the last and closing 40th hairpin bend, we saw a sign board that Balaji Temple 7km. So dad decides to visit the temple first, and the sky open to light sunshine moved us ahead. Along the way its quite tea estates; and the temple lies in one of the highest place in valparai, called Karamalal. The road to the Balaji Temple is such rough with many potholes and being very narrow upward, the SUV hardly climbed the hills. Reaching atop we smelled oily from clutch, where later to realize that almost every vehicle odor the same, riding upward.
With no idea how well the place gives way to my wheels, so I and sister remain to leave others to visit the temple. My bro, who took the camera to capture some pictures of the temple was warned by the guard, and advised the pictures would not remain. Whether it’s true or not, I lost number of pictures in my cam including those taken at Balaji Temple, when checking the pictures later! Some told they have some magnetic instrument to sweep pictures taken at temple, which I can’t believe how it’s possible without my cam! At the other hand I doubt may someone erased the pictures unaware, even though I could have lost the whole pictures of the day, but I lost only whatever taken after aliyar :( none would do that, as they know how important those pictures are.

The drive continues through the tea gardens, to reach valparai by 5.30pm. With the address, we found our relative house, who have booked cottage for us next to there home. To tell, it’s a wonderful stable! We are pleased by the way the home and yarn appears, with more space for parking and gardening. I am so attracted by the views of tea estates and flowers in the garden. The relatives we met there are unknown before, where no memories we meet each others in any occasions, but they most welcomed us, in such a way it pleased receiving there respect and love! Man, it’s an ever evening that we played and been so happy like that, teasing each others. Our uncle cheered the evening and throughout our travel. Till our dinned we spent time in the yawn, playing bat and ball in the pleasing weather. It’s no more like Ooty or Kodaikanal that we head down before the night dawn. This gives a simply fantastic sense! 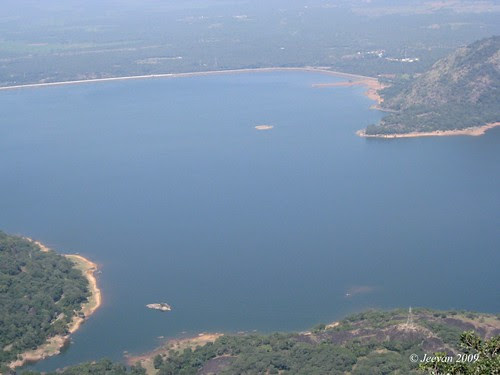 Thanks so much for spending your valuable times here reading this long post :)
Posted by Jeevan at 8:08 am

Wonderful pictures ! Makes me aspire to go back to Valparai and Top Slip !

I have ever green memories..
:)

I could almost see those places in front of me as I read..and with the beautiful photographs...

You write it all so clearly Jeevan....keep writing.. I love your travelogues, dear :)

i think you should gradually try improving grammar and sentence structure...the teacher in me peeking out -- hope you don't mind...

if you so prefer, I can help with correcting mistakes, when I get time. do feel free to tell me, dear..

some don't like the intervention -- thats why I am suggesting :)

Nice post, Jeevan. I will visit these places soon.

Thanks for visiting my page and your comments.

lovely pictures and post. Keep it up
you can see some of my kodaikanal pictures at http://www.kodaikanalhotels.com/
Best regards
Bala

WOW! dear these are some of the hidden places I must say as until I have read this...I didnt know any such place existed ... :) thanks to you to introduce all of us with Nature :)
Cheers

Fantastic shots and been ther years back during school days.

OMG ! How stunning this place is ! It looks like a paradise. To your question, that garden is located in Ladoo Sarai, Delhi. Thank you very much for visiting my blog. Have a nice day :)

Kavi – Thank you kavi, Valparai happen to be my favorite now because of its pleasant weather than any more.

Devika – Thanks so much dear, your words truly encourage me more! I am not eligible with grammar actually, but only by reading I got interested to write something and that practice helps me in writing. I dint much bothered by grammar, but I feel convince what I want to express is understand by others. Not like I don’t mind what you said and I really appreciated you to have come forward to point my mistakes… and so pleased knowing your care on me. And you’re most welcome to correct my mistakes whenever u like dear :)

Jarlin – Thanks for coming by, hope u enjoy these places alike :)

Dawn – Actually Valparai is not announced as tourist destination so far, and more over its not renowned, so it remains pure in nature. Hope I make u know about this place. Cheers dear :)

Humanobserver – Thanks for remind me with ur answer and coming here :)

Wow! The superb land Valparai....I so much wanna go there someday! Brilliant pictures and a wonderful write up to go along!

Yeah dear Jeevan...I totally agree with you..writing and communication is much more important than grammar and structuring...

But since you observe so well, and write it quite naturally I wished you improved on the other aspects too...

I will pick up one during every week end and correct it for you -- to the levels I can...and then may be you can compare and learn --okay, Jeevan? :)

Rakesh – yes, it’s a heaven of nature. Valparai has no more attraction, but when we seek there are more places to examine. Hope u like valparai, which is not alike ooty, esp. when it comes to weather.

Devika – Thanks dear. I understand what u say, and I wish to correct my mistakes to see what I have done so far. Sure I love to learn from u dear, but don’t use cane to hit me if I am wrong ok ;) so nice having you here :)

i'll correct it for you and you can learn yourself each time...pass me your email id here if you can --else at mine when I enable comment facility...

and we will communicate via mail :)

Sure dear, and thanks for your company :)

I love your travelogues ... And all these experiences are worth documenting .. well done

Stunning pic..the lake especially..have never been here , your travelogue is tempting me