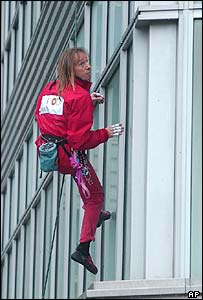 A daredevil climber known as the French Spiderman who has scaled skyscrapers around the globe was arrested recently as he tried to clamber up a Houston office building. Alain Robert, 43, dashed from a taxi to the 46-story Houston Center but was stopped just as he was starting his ascent. Police said a reporter had tipped them off to his plans. A tall officer was able to grab his ankles. He was about one or two steps from getting away.

Read about Cars in my New blog Shyam'sssss
Posted by Jeevan at 12:52 am

i remember when that guy was here - he got stopped halfway climbing the towers ;) but he sure did grin ;)

You have an outstanding good and well structured site. I enjoyed browsing through it gmc pad mobile home