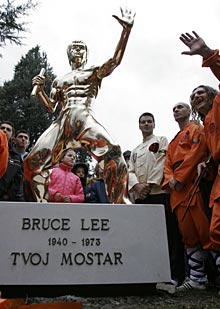 Bosnia's southern town of Mostar unveiled the world's first statue of Kung-Fu legend Bruce Lee, paying homage to a childhood hero of all its divided ethnic groups, says a Reuters report. The life-size bronze statue is situated in Mostar's central park, close to the former front line of Bosnia's 1992-95 civil war. Unveiled by its initiators, Veselin Gatalo and Nino Raspudic of Mostar's Urban Movement, the statue portrays the Chinese-American actor, who died 32 years ago, in a typical defensive fighting position.

This does not mean that Bruce Lee will unite us, because people are different and cannot be united and we will always be Muslims, Serbs or Croats, Gatalo said. But one thing we all have in common is Bruce Lee. Gatalo has said Lee a hero to teenagers all over Bosnia in the 1970s and 1980s epitomised justice, mastery and honesty, virtues the town had badly missed.

There is another post in my New Blog Shyam'sssss
Posted by Jeevan at 2:00 am

Thats a nice way of showing respect to that legend.