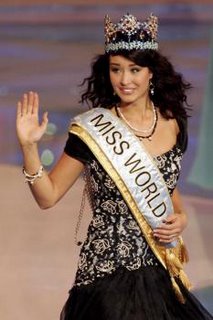 The dark-haired winner was born in the Icelandic capital Reykjavik, but grew up in a small town called Seltjarnarnes. Unnur spent her summer holidays working as a police officer at an Icelandic airport. Her motto was: 'you are what you do' or 'you are what you make.

Second place went to Dafne Molina Lona, 23, from Mexico. Ingrid Marie Rivera Santos, 22, from Puerto Rico, came third after tens of thousands worldwide had voted per e-mail, SMS and per telephone. Viewers had selected two candidates from six regions of the world for the final. Three more candidates reached the final round from additional contests.

The 55th Miss World beauty pageant was broadcast live from the Beauty Crown Theatre to about two billion viewers in 200 countries across the globe. Actress Angela Chow, who is famous in Hong Kong, and U.S. television star Tim Vincent, presented the two-hour show.
Posted by Jeevan at 1:14 am