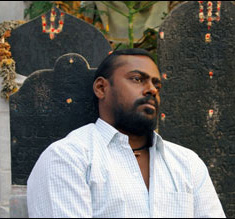 Watched the Veyyil (Tamil Film) on Friday evening at the open theater, its an alive story of human sensation! It have been a (little) while I watched a heart melting film like this after Pithamagan and Thavamai Thavamirunthu. Some of the films will really induce an expectation when it was announced; like that Veyyil was one, which make me expect a best. The Big head of Tamil Industry, Director Shanker’s S pictures was an important for the expectation, because I hope shanker’s selection will never go wrong. His early films Kadhal and Emsai Arasan made a difference on the screen, by new story, which helps to bring talented artists. In this film it brings a Best actor before us, it’s none than Pasupathy, just simply amazing performance. Hats off!!

Veyyil bind with a father, mother and 2 brothers who live in a drought village in Virudhunagar. Father Sivanandi was angry person, who has a goat meat shop, his son’s Murugesh & Kathir studing in school. One day Murugesh, who was a MGR movie lover, cuts the school and went to cinema. When Sivanandi knows this he gives him severe punishment of tying him in the Sun’s heat with undressed. By this Murugesh felt insult and run from the house with his mother’s jewels and join in a cinema theater as a cleaner, near chennai and step-by-step he becomes the operator of the theater as a youth. By the time he makes love with a teashop girl; and their love & the secret meet in the operator room comes public and as usual the opposition of parents induce the girl to suicide and this creates a big wound in Murugesh mind and the exit of Theater sent him to a situation where to go! So he decides to return to his homeland and walk towards it, in between his brother Kathir was well settled with a advertisement company and was impressed by Menakshi, an advertise announcer and makes love with her; and faces a group who can’t digest Kathir’s growth and like to destroy him. In this, what are all Murugesh faces in his homeland and with his family; how kathir solve his problem with the angry group and how murugesh helps kathir are remaining story, which said in a sensitive way, which melt our mind. 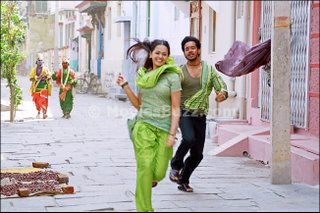 Pasupathy as Murugesh makes our eyes wet by his wonderful acting, while romancing with Thangam, in the song sequence of Uruguthae maruguthaea… and fighting with the angry group shows him as a hero. When he craves for his mother’s love and got it from his childhood girlfriend Pandi (Shriya), in the song sequence Iraivanai unargera tharunam eathu…. he show his childish mind and its very soothing. The climax were pasupathy save his bro while taking the knife stab in his stomach, his angry of killing the villain with dozen stab was unacceptable, but when he dies he makes tear in our eyes. Barath as Kathir shows a mature in his acting as the head of the family, while shouting on Meenakshi (Bavana) in the recording room and chasing to collect her voice for AD’s make little smile on the face. Meenakshi looks like our next-door girl, and has freshness in face and cute smile. While crying on the show of pepsi ungal choise she makes us laugh. Important thing in this film was the small boy who acts, as the childhood Kathir was very sweet to admire his prank acting, and to my surprise he looks like my brother (yes my bro looked like him while he was kid). The theater where Murugesh works was an old theater in Thirukkalkundram; my mom has memories of watching films in that theater in her childhood days when she visits his aunt’s house.

Songs have comes quite good from G.V.Prakash kumar. Kadhal neruppin nadanam was pictured in the short streets; makes wonder its real or settings. Veyyilodu Vilayadi song was very sweet, the childhood wishes have pictured in the drought land and sun shining lights with group of village children take to the days I spend in the village. The village song was creating a feel of the village festival, which would have the dance and drama, in this Barath’s participation was funny to admire.
This film tells the relations of the human life and how it affects the children’s mind when there parent’s strictness crosses its limit. Till now I can’t come out of the film and the character are realistic. Veyyil (sunshine) melt’s our heart. 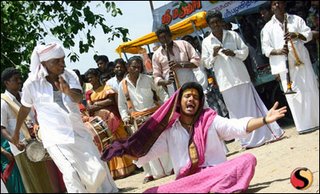 Sounds like a 'warm' movie...gotta watch it then. Ty Jeevan!

am planning to go this evening for veyyil as per my couple of weeks' delayed plan...enakku andha urugudhaey songkagave parkanum n my fav. artist is pasupathi.

must watch this then! thanx bro.

One among u – pasupathy has acted well in this film. Go and have a nice time :)

GP – watch it bro, the characters are natural!

Visith – ya! I really felt on pasupathy’s acting.

Your review about Veyil is impressive. I am now tempted to see it. Seems like good one. Pasupathi acts well.

Kadhal neruppin nadanam song was picturised in varous streets of our Virudhunagar. yes, i am virudhunagarian.

thanks a lot ..... i was searchin for the name of this song i heard somewhere......truly an awesome song