As the election to Presidential post to be held in June 2007 approaches and pressures has built up favoring Kalam! The President of India is selected by less than 7,000 member of Parliament through votes, but already 70,000 email have voted in President’s website that A.P.J. Abdul Kalam should not say no to second term as 12th President of India. Not only the ordinary citizens, the lawyers, administrators, scientist, young politician…. are standing for the Kalam who speaks from the poor, positivity, secularism, culture, music, dreams of happy and peaceful India.

As before only little of them know about Kalam as a scientist, teacher, who reach big posts in the government departments and the brain behind the India’s first Satellite Launch Vehicle and defense Missiles. But as president he has become the role model for many youths and touched the hearts of a large number of people. His Mission on India 2020, which has, plans to develop India into a knowledge superpower and into a developed nation by the year 2020 had spoke his interest on India. His brave and bond actions on speeding in the sky on Sukhoi bomber and going deep in to the sea in a submarine, visiting the world’s highest war field Siachen glacier and refusing to sign on the Office of Profit thinking it was patently unfair and against the spirit of the constitution. 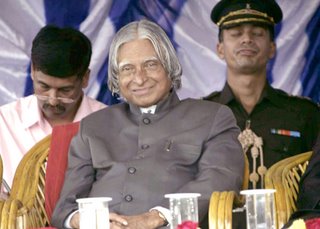 Above all his tremendous rapport he has built with both the haves and haven’t of society. He reaches out to the poorest, the richest and fast expanding middle class to take care of public interest. Issued a 3lakh cheque from his own account recently for his coach full relatives who visited some places in north India and gifting to orphans on national festival days. His invite of constables, special persons and award winning panchayat presidents to rub shoulders with the mighty on Nation days; providing mission models for states which can be implemented in a bipartisan manner and improve educational facilities to make India a knowledge superpower. The highlights of setting up the Africa Satellite to provide distance education to 50 African countries and his replay to the US and European scientists in October to a question of what’s India’s core competence? (As he said: Finding the leadership to handle a billion democratic citizens with a multi religious, multicultural and multilingual mix). Has felt us never before seen such outpouring public support for a president. 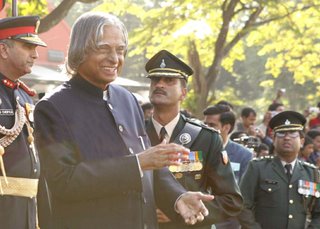 We have much to tell about him to give a second chance as president. He tries to meet as much people as possible during his working day, amide his hectic schedule on flying, and touring, kalam has time for the finer sensibilities of life. When we all are thinking about his second term, president said recently that he would love to go back to teaching after his work as president is over. Here I like to express my thought on this, as a president there is no doubt he is the Best and best forever!! Did he come as president again or not we get only positive from him. If he becomes president we (students & youth) can’t share much of his good thought and intelligence, as he will be busy with the job of president, with little time to spent with us. Without any political or party background, our India will be very safe in his hand for another 5 years if we give him chance for President. As a teacher he can create many intelligent and positive thinking students for our future India to work towards the developed India. Its positive or negative if it spread through students it would reach soon, all our parents are listen to their children, grandparents listen to their grandchildren and every one in the family sure listening to their children what they speak, so it catches to everyone. Post can be anything, but his thoughts are same, its India!!
Posted by Jeevan at 5:20 am

I too support Kalam's second term! He is real visionary who has power to bring the change in India!

I would agree with you. He deserves another term. Perhaps some more power to him will put the political class in discomfort. But India will be comfortable ~

Certainly he deserves another term, but they are making a politics out of it! I hope that the tradition of unanimous acceptance prevails this time too!

I would say kick of these ministers and make our Kalam as the only man to rule the country...India will become super power in next 5 yrs...

I am all for Kalam staying on for the next term.There are very few people like him nowadays.

Hi, i was looking over your blog and didn't
quite find what I was looking for. I'm looking for
different ways to earn money... I did find this though...
a place where you can make some nice extra cash secret shopping.
I made over $900 last month having fun!
make extra money now

based on ur post n the comments so far, looks like u guys r together ralling behind Abdul Kalam. he must be a fine gentleman then.

good to have educated and sincere people on the top, my vote is for Dr.Kalam :)

After independence, there are hardly any leaders but lots of politicians... Kalam is the only leader i have seen who leads by example...

hemm...i'm not against him, but everyone around the world knows that in politics, its the prime minister who holds the true power, the executive power. Not the president. Pity, he can and wants, but he cant move beyond that.

jeevan,
u know something?we [karthik, senthil, and me] were fans of Kalam from the days he worked as scientific advisor to Indra gandhi.And karthik was blessed to be his student.Kalam worked in Anna University in 2002,and he taught karthik.Senthil used to tell,"Amma,karthik's marriage should be presided by Kalam only".And Senthil chose to study Aeronautics with the biggest dream of choosing Kalam as his project guide.we can say we were not fans but fanatics.But to our greatest disappointment, he became the President.When all were happy we 3 felt very sad ,feeling that we have lost him,as if he is our possession.My students would present his photo for my birthday and say "mam,your lover's photo".Karthik followed his hairstyle, and he would follow his dressing style,of course his dressing has changed a lot now.And i would tell you the pet name we had for him ,over the phone.

ponniyinselvan - That's cool ma!! I becomes fan of the hero only after 2000. Let we bring kalam to senthil's marrage:) will remain u the pet name when we talk next time.

Dear Friends,
Here's a website which is a citizen's campaign to request, vote and bring back Dr Kalam
as President for Second Term in Office - www.BringKalamBack.com. We all know the
power of his vision and the way he deliberates by providing all the necessary steps to
achieve that vision. We need him with us for a few more years to show us the direction.

The website will authenticate your registration by sending an email to confirm
and vote after providing the necessary details for registration. You will get an
email in your inbox to click and vote. You'll get another email to request your
friends to vote.

2 - 4 weeks is the time we have to make this campaign a success. If you don't vote,
we might be responsible in not having President Kalam for a second term in office.
India's voting will be sent to President Kalam's office and various political parties.

Who's the next President of India, YOU could get to decide?