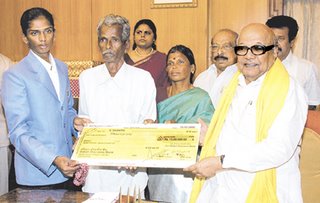 In the recent 15th Asian games, which was conducted in Qatar capital Doha, Indian runner S.Shanthi won silver medal in women's 800 meters, for India and who belongs to the district of Pudukottai, Tamil Nadu. But now the Shanthi, who brings great noble for Tamil Nadu through her silver medal in Doha, faces a rare issue. The news has come out (here and here), she has failed to prove her women’s nature in the test. Some news through press said the Indian Athletics conference and the Olympic council of Asia have decided to withdraw the medal from her.

In this situation an officer form Indian team for Asian games told there was no mistake on Shanthi in this issue. The Indian Athletics conference try’s to win medals in cross cut, so they continuously bring her to participate in the international games. Another officer form technical committee said after 1988 the international athletics conference decided and brought to force, not to conduct the test on women’s nature. It must be done only, if any complain register on the player. As she already competed and won the silver in the 800 metres in the Asian championships in Incheon, Korea, last year and In August, she also won the 1500m gold and the 800m silver in the South Asian Games in Colombo. I don’t know why they creating an issue now, leaving about her gender when she won these medals for us.

This really brings only worries and mind breaking to the players; then what is the purpose of bringing their energy and hard work for our country. Whatever test it can be, it should be done and the report must submit before the player participates in the games. Leaving that coming now and telling her that ur hard work is waste, and return the medal. There are many who defraud and buy medals using encouraging drugs, but when a person worked hard through her talent, these types of disappoint break their self-confident and talent. Even though I appreciate the Tamil Nadu government’s decision of giving her the encouragement money as they announced for her achievement for our state. It would be very nice if this issue becomes a rumour.
Posted by Jeevan at 12:29 am

you are right jeev.it is a big error on our side.When they have known all the rules,how come they have overlooked this? Now it is like humiliating her efforts and hardwork.There is a report that she has been rejected from Railways on this gender basis.Where are we going in this modern age and discriminating people like this?Like any other issues view of opinions are different from each person.Let us wait and see what happens.--SKM

Jeev: I think people shud be proud of what she brought home thang ender. I personally feel, someone is playing around to remove her.

really it was sad to hear tat wen they announced tat shd didnt clear the test for woman...

rite now shd wud have felt tat she has done useless work for india even by winning, motha sandhoshamum ippo illa avanga kitta...

such a pity that her winning is questioned such! She should actually be awarded greatly for her achivement... hope she gets it.

Sandai-Kozhi - The team, which conducts games, should only see how talent they are! They never see the future of the participants, and their feel before tell some thing wrong about them

One among u – who will feel good if some thing, comes wrong about them. its carelessness of the organizers.

Geetha – lets it be a rumor.

Keshi - ;) ur teasing him here! Yes dear she is a real winner.

i appreciated our cm's dr. karunanidhi's support even after he heard the news and still presented the gift for her. i am in full support of santhi :)

This is very idiotic, How could they act like this? I feel sorry for her and her family.