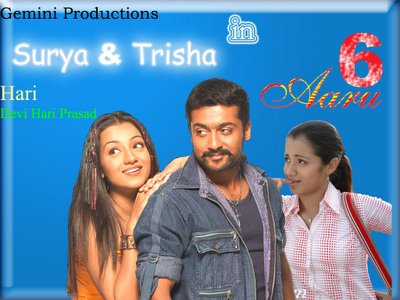 This is a Photoshop, photo

Saran, successful director has turned into a producer. Gemini Productions, launched by him has produced Aaru. Aaru has different meanings an abbreviation of Arumugam, which is another name for the god Subramaniam, a number, a river or a signal to cool down.

Suriya plays the role of Aaru, turbulent and angry young man like an overflowing wild river, who cares little for consequences, does what he pleases, as he likes, and who needs to cool down. Obviously and expectedly, the movie promises to be an action flick. My Favorite Trisha is the heroine, and she is upbeat and excited about her performance in this movie. Much of it has been shot in and around Chennai, unlike most of Hari’s earlier movies. Direction is by Hari, music by Devi Hari Prasad. The music is already hitting the top charts and will boost the movies image and popularity. I like the song Thottutae Thottutae...

In Ghajini, Suriya had the half-crazed look of a person with a short memory span, and he was covered with writing, tattoos, etc. In Aaru, Suriya’s hair-style was designed in London to provide the exact touch to his character in this movie. Since the super success of Ghajini, much is expected from Aaru.

Aaru is Releasing this Friday December 9th.
Posted by Jeevan at 3:25 am

i am waiting for this movie

Jagan - me too, waithing for Aaru.