Many children in Jammu and Kashmir are being forced to work for terrorist groups like Suicide machine. 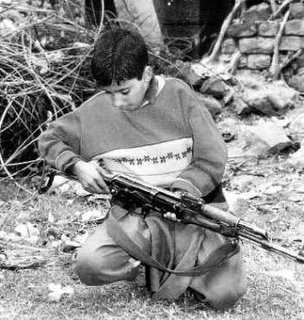 On July 12, 2005, Mohammad Akram (11) was on his way home from school when he was stopped by a group of terrorists. They asked him to throw a grenade in the local market place, and promised him Rs. 500 for the task. Terror-stricken Akram did not have a choice — he had to do as the men said. But before he could fling the grenade, it exploded in his hands, injuring him severely. A few days later, Tahira (9) from Pangai village, Poonch district, was seriously injured when an improvised explosive device (IED) she was handling exploded. She too had been forced by terrorists to place the IED on a road often used by the Indian troops.

Various terrorist groups in Jammu and Kashmir are using an alarming number of children as terror tools. The children are used as spies, porters and as guerrillas who throw grenades and plant IEDs. The children (some barely nine or 10 years) are even used as shields in encounters and deployed in operations against Indian security agencies. "The terrorists sometimes give Rs. 100 for throwing a grenade. In most cases, either the children get hurt or they miss their target (security forces), which results in many civilians being hurt. That's why there are so many civilians dying in grenade attacks these days. Srinagar Police said There are many examples where unsuspecting children have been used either as couriers to send messages or to ferry arms and explosives. A security patrol would never bother to search a child earlier. But now we need to change our strategy.

Increasingly, the army has been discovering several young warriors working for terrorist groups. Abdul Gafoor (12), from the remote Udhampur village, was recruited by terrorists and used for operations against the security forces. He travelled with the Hizbul Mujahideen men in the thick forests of Pakikot, Narla and Larki in the hilly belt of Udhampur. Terrorists killed his father in 2003 and his mother was kidnapped for allegedly having links with security forces. The first two months, he was made to wash utensils and carry their load as they moved from one village to another. Later, he was trained to use the AK-47 rifle and handle explosives, narrating his experience after being rescued by the security forces in 2004. Gafoor was also used as a spy and as a human shield during attacks on army patrols.

In June 2005, during an encounter in the Pir Panjal Mountains, the army found Muzaffar Iqbal, barely 11, working as a porter, guide and part-time guerrilla. Iqbal was recruited in February 2004 at gunpoint while returning from school. He was also made to carry sorties (raid or an attack)...he was not aware of the bigger game plan of the terrorists. Mohammad Altaf, 13, was with the terrorists for more than a year. Five other children and Altaf cooked for the terrorists and washed utensils. They were also trained in arms and sent to get weapons from hideouts. The security forces claim that along the Indo-Pak border, Pakistani boys, as young as 13-14 years, carrying deadly weapons, have been arrested. Recently, nine such children were picked up from the Line of Control. They revealed they had been trained at a madrasa (religious school) in Pakistan and were sent back to India territory after undergoing basic military training.

At times, these child warriors also get killed in encounters. On August 8, 2003, a 13-year-old boy was killed in the Mendhar sector of Poonch district while entering Indian Territory from Pakistan Occupied Kashmir. The child was among the seven other terrorists killed in an encounter. Most of the children picked up by terrorists are from remote areas of Rajouri, Poonch, Doda, Udhampur and Kupwara, and belong to very poor and illiterate families. In fact, the Jammu and Kashmir police has noticed a clear trend since 2004 more and more children go missing from remote areas.

An estimated 100 children have been reported missing in Kashmir since 2004. "In the early 1990s, only a handful of children were involved. Last year (2004), around 200 were hidden in the mountains. The police only know of children missing when a complaint is registered. If police consider unreported cases, the number of children missing and recruited by terrorists may run into hundreds. The terrorist groups (many of whom have lost several members in recent years) want to save trained terrorists for bigger operations.


There was another post in Shyam'sss (petrol vs diesel)
Posted by Jeevan at 1:14 am

Child soldiers, very very sad. At the time when they should be enjoying their childhood these kids are being forced to fight for the so called 'cause'. Not just in Kashmir though, happens in Sri Lanka, Africa and in other parts of the world too. Sad

this is so pathetic! an act of coward to actually order children to do their dirty work!! damn..i wish them to be burnt in hell..

Very sad and bad situation. Using children for terrorism. We can see the same in the African countries too.

I hate any crime against Children...and using them for terrorism is absly unforgivable...

Very sad Jeevan. Evil part of human being. There are dark sides of human. In one way everyone is selfish. Those who want to achieve their 'cause' try to use Children and this is a shame. Children are the best of God's creation. It is disheartening to know that they are used for such purposes.

really atrocious thing happening in kashmir.future pillars of india is under destruction.

Angel – Children’s are the future of the world, when they are forced to involve in Terror, it was a dead for the world.

Amutha – Welcome to my World. Yes they should get Seviar Punishment, when we give a big punishment for them; all terrorists will fear and will not touch children’s.

Jo – yes very sad to hear this, our Indian dreams are spoiling.

Ibh - me too. Terrorist don’t have good mind. Thanks friend.

Balaji – When we use children for good things, our country will develop soon.

Awakening – yes very sad, the government should take care of Kashmir Childs and should give heavy punishment for the people who involve children’s for terrorist activities.