An ear in Patna 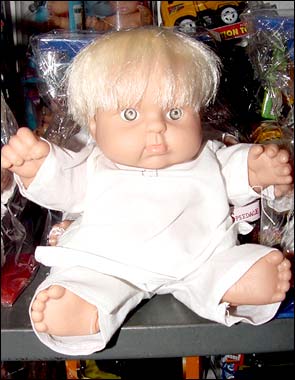 Indian Railway Minister Lalu Prasad Yadav’s mind is bordering on depression since his Rashtriya Janata Dal’s defeat in the Bihar Assembly elections. Gone are his frequent one-liners to newsmen. The same applies to his zest and swagger. In Parliament, he leaves it to his minister of State, R.Velu, to answer most of the queries.

These days, Lalu is spending more time in the central hall, than in the House, a mobile phones glued to his ear. Who does he keep talking to? It seems he has made an arrangement with an RJD MLA in Patna (capital of Bihar), who sits in the Assembly and dials Lalu’s number so that the leader can know about the going-on first hand!

There is another post in my New Blog Shyam'sssss
Posted by Jeevan at 2:18 am

Well how else will he know how to get back his gaddi!?

His loss this time is more shocking to him than anyone else!

I am sure atleast this lallu can talk sense.

Random – when he did any good things for people, they have selected him. His party lost the government because of his cheat in some department.

Truly yours – hehehe. Who knows.