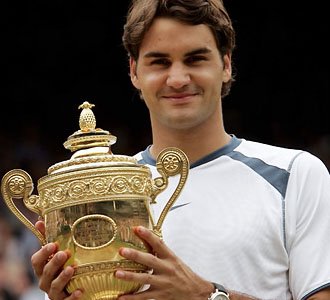 At the end of the year, the delectable Swiss chocolate might have melted, but that doesn't take away the delicious fare that has been served, and will continue to be served. Roger Federer might have lost the Masters Cup final, but that is just about the only thing he has lost. The number of Grand Slams that he will pile up in the years to come continues to be a topic of discussion and will not alter by a slight increase in the number of people who have beaten him this year.

The fact remains that 2005 has been a Federer year. It took supreme performances from Marat Safin (Australian Open semifinal), Rafael Nadal (French Open semifinal), Richard Gasquet (Monte Carlo Masters quarterfinal) and David Nalbandian (Masters Cup final) to take game, set and match against him. Such was his domination, that it was `Who beat Roger Federer?' rather than `Who did Roger Federer beat?' that grabbed headlines on most occasions.

Under the circumstances, can Federer be challenged in 2006? An occasional upset or two might happen but the list of serious contenders doesn't require more than a hand or two. Rafael Nadal, on clay and Marat Safin, if his mind is on the court and David Nalbandian at his best stand atop the list of pretenders. Andy Roddick and Lleyton Hewitt are too one-dimensional and need to add more variety to their game.
A fresh and injury-free Roger Federer will continue to be the man to beat in 2006.

There are thoughts that men's tennis will benefit if Federer is beaten, even occasionally, to open up the game. But is that good for the game?. Despite claims of his domination making men's tennis predictable, there is no better sight in tennis, than Roger Federer in full flow. But for the sake of the game, may the best man win.
Posted by Jeevan at 12:50 am

Sure, Roger Federer will shine...

I hate it when I get bruises, especially black-n-bluez ;-) PEACE

Vanathi - Welcome to my World. federer is a hard worker,so he will do his best next year.