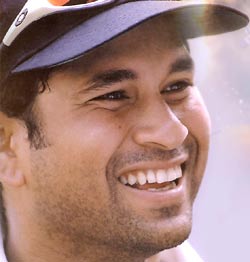 A punch in the air and a half-relief-half-joy kind of look marked Sachin Tendulkar’s Test century no. 35 at the Feroz Shah Kotla in Delhi on December 10. It was more than just a milestone for the maestro at the fag end of the first day of the second Test match against the Sri Lankans. It was the sum total of his 16-year international career punctuated with pleasure, pain, hardships and remarkable achievements, not to mention the odd disappointment. Fans for whom cricket is religion elevated him to the status of God and then questioned his greatness. They conveniently forgot his 72 international centuries and doubted his ability to make a comeback after a long lay-off, thanks to a tennis elbow.

Such was the inevitability of his breaking Sunil Gavaskar’s record for the most centuries in Test cricket that when the moment descended, it was almost an anti-climax. The achievement also opened a window into the Sachin of now more open, emotional, intense. Earlier, each achievement, each essay highlighted a man in total control of the action on the field and his emotions. Today, Sachin continues to perform but does not hesitate from talking about the difficulties he is going through. There have been very few moments when I have felt emotional, he admitted on that wintry Saturday in Kotla, but this time I felt very different.

Sachin has scored centuries against all oppositions, in all countries: 16 of them were scored at home just like Gavaskar and 19 away, one more than the predecessor. Gavaskar called him he closest thing to batting perfection this game has ever seen. Sachin has established his stamp over all types of attacks. In fact, some of his most memorable essays came in adverse conditions. There have been those rare occasions when he looked entangled at the crease. But largely, he has been the dictator, giving nightmares to bowlers like Shane Warne.

By the time he was 19 he had already scored six Test centuries in places like Manchester, Sydney, Perth and Johannesburg encountering the likes of Alan Donald, Merv Hughes and Craig McDermott. After century no. 35, the cricketing world has already started speculating on where he would stop. Gavaskar has put his money on 50 Test hundreds. Sachin is only 32 and should be able to play for another 6 years at least, if not 8," he said in a statement after the record was broken. The path from here on is one of endless possibilities for the little genius. He has already conquered the world and all he needs now is to conquer his own will and of course that elbow which made many speculate about his career.

Sachin's 10 golden knocks will come every day in the bottom of every post.
Posted by Jeevan at 1:22 am

Great blog! I was surfing the web to find tips on Mind Building. If you are interested have a quick look at http://www.wellnessmaster.com so we can exchange ideas.