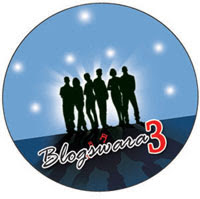 BlogSwara Version 3 the online music album by bloggers has released now earlier, as soon in the times of 3 months gap after the Version 2. For those who don’t know about this, BlogSwara is team of blog mates, who were from different parts of this world, some haven’t even seen each others and every thing where done through internet. It comes out more beautiful and youthfully this time in 3D languages of Tamil, Malayalam and Hindi.

All songs were adorable!! And the quality of songs were much good that last versions. Some of it was our Jo’s Malayalam song Kulirolum was very nice with Jo’s vocal and music was perfectly gone. The second one that attracts (my fav) me was the romantic Romeo yen kadhal romeo… wow I admire the voice of Ranjini Vijay and Mux Narasimhan. The Yaaradhu nenjukkul kudivandhadhu… was poetic lyrics. Check the album here as it’s online (its free download also) and don't forget to comment here about your thoughts on the album. I appreciate the effort of the blogswara team that was doing lovely works. Those who are interested in singing this is the best place to expose. If you are interested? Contact the blogwara team and you can get chance in participate in the upcoming more albums.
Posted by Jeevan at 7:00 am

Just listening to Yaaradhu song and its nice. They even have the lyrivs ther.

Thank you for sharing coz never heard about it before.

Thanks Jeevan for your writeup and spreading the word. I am glad you liked my composition Romeo :) It is a big boost for me as I never thought I can compose.

Thanx for the info jeevan.

Jeevz, delete my previous message. it was posted without loggin

Good place for music. thanks for sharing with us also..neva heard abt it be4

Priya, keshi, balar and thooya have a nice music their friends:)

Krishnamurthy – you have done a wonderful composition. I am very glad to see u here and hope to listen more songs from you Krishna:) I wish you all the best in this music world. Cheers!!

... oops will check that!! thanxx jeevan!

Thank you for covering this buddy! Am fad you like my song!!

That's a nioce piece of information Jeevan. Thanks for all those links.

Jeevan,
thanks for this informations.
Blessings to you!

Hi Heevan,
Thannks for the nice words. I'm glad you liked the songs.
We had a good team involved in Yaaradhu and Romeo and infact all of the BLS songs.
regards,
-Mux Narasimhan