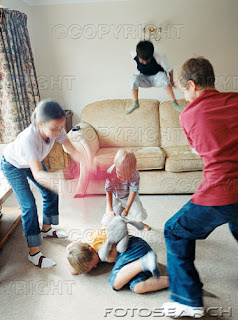 Children are very sweet and adorable till they show their another side! Another side is nothing something different, its their in everyone, but it was how we expose. I am talking about children who express over stubbornness, disobedience and obeying indiscipline. The child always makes angry other easily by disturbing or making irritate with unnecessary screaming. Some of the times we really don’t like disobedience child, some times even I too have told my mom why these children are so naughty, can’t they sit quietly and play instead of fighting to cry, shouting, breaking…

I know we may be doing the same as a child what they are doing, but being grown we feel these are nuisance. To my knowledge I don’t remember of doing more indiscipline than today’s child are… they are double than us. I have experienced in my apartments while children playing, they give a sudden scream in a high-pitch voice that shock us sometimes happen wrong, and that too sounds like stamp on a parrot. Another is the guest children, who can’t keep quite from taking something that was unknown to them and stubbornness to get on what they see. I won’t tell it’s their natural to behave like indiscipline. It what how they brought up. Giving over indulgence is hiding their disobedient act and without sternness, the parent’s leave the child what ever they do. I remember one of my cousin when he was child throw a pup from upstairs, without realizing that life… ya the pup lose its life.

Knowledge of decency is important for children. I notice some children act unusual in public places or in functions like jumping, running, climbing and screaming. It makes us think are they come from some other planets. What makes me feel worry was the words used by some children from very low level up to abuse? Who can we blame for this?… Its parent’s response to teach them how to behave, and its more important to check the surrounding they are practicing. All children are same, the things they learn creates their character. What my thought is the parents much be matured to handle the children and bring them in a good surrounding. The people need to know what to talk and how to behave before children.

As grown I may think like knowing all, but children can never be like us. Even I complain about it, I must sense this is the stage for children to scream, fight, play with no expectation to spend their energy.
Posted by Jeevan at 1:42 am

i think its the env children grew up now. i remember having a huge lawn, with guava and mango trees around the house. i had so much space and greenery! i can run around as much as i want. i want let my spirits free. but when i look at my own nephew now.. i feel like, his is being 'locked' in a small space. he can't be free like me and he is not. he couldn't express himself like i did. and i see a child who always scream and threw tantrum. he has to expose his inner feelings but he dono how. and this is how he is telling us how he feels.

Amutha - Even some do not have times to enjoy their childhood with their full schedule! I wish your nephew to expose from his mind and i hope u will be their for him to come out from that small space. :)

A child's sense of freedom is very much dependent on her/his environment. We should let kids be kids, and not treat em like some kind of caged animals.

its all depends on how much room we give to them...they very well know how to manipulate us :-)

Keshi – ho that’s very bad to think like treating kids behind cage. What I was to tell was teach them how to behave and how to control the naught things in the different environment they present. Child freedom is must, in the name of freedom I think we should not be quite watching what ever they do!!

Syam – haha… I think u have good experience in this;)

Most of the Children are not grew up with social values and social decorum. Parents are just allowing their children to behave as they like even outside of their home.

By doing this Parents feel that, they have given all freedom to their kids.So that the kids can have a nourished growth.

The parents take this issue just like that, they are absolutely not aware that these misbehaviour of their children play its role in their personality.

Hi Jeevan!
Very smart post! My friend from Poland write beautiful about how grow and educate children on her blog and web . Last she wrote beautiful book. If you would find little bit time she will be happy for your visit.
http://www.superkid.pl/blog/
Wishing you great day!

jeevan,
i agree with you 100%.I am amazed to see the way the children behave.their 'don't care' manner,their superiority complex, no respect to elders,their 'all knowing attitude' their adamancy ,surprises me.And the worst part is that their parents encourage them.Once i had been to my friend's house.It was news time and i wanted to see news , but their children refused to change the channel.Their parents instead of advising their children,told me that they are very much interested in the cartoon channel..right.let them be.but for 15 minutes and that too for the sake of guests.
In another house ,i heard the children shouting at their mom,saying"why do u invite guests?"
what can be said,I do not know.

Sowmya - As a parent they can carry what ever they do or disobey in behavior, but thinking that every one will go like that is wrong. Living near a place being like a slum, some times back, I could see how the kids talk and behave before others, and its very hard to give speech to them… suddenly they may use some abuse words.

Krystyna – Thanks dear! Your friend’s site has a different language I guess it may be polish. I couldn’t able to read.

Ponniyinselvan – Hi ma:) nice to have you after some times. Ha that too much for them to ask why u invite guests! At least that’s fine they refused to change channels, I have seen in my grandma’s place that one of my kid cousin throw the TV remote carelessly to broke and their parents not get angry… being silent he take it as positive and continue his disobedient acts. What I think is if we teach them every good habit and how to behave from their childhood, it would be easy for them to catch to make a good person back.

Jeevan, I wish to agree with Keshi. Let childeren be childeren. The very essence of childhood is their innocence and naughtiness. Being elders, it is our responsiblity to protect them from getting harmed, but still letting them to be themselves.

when they need attention and affection and they can't get it... children tend to be stubborn... all to get our attention. we have to understand them :)