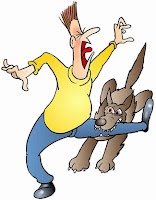 When it comes to dogs, we know they are grateful and express love on those who cares them well. But today’s some (I think more) dogs are not like that, or we can tell they changed their habit to taste the flesh of children. Now a situation was created against the children, and parents were in fear to leave their children to play outside their home, what they usual do. The reason for the fear is the recent incidents of dog’s biting on playing kids.

The dog biting comes to light when a 6-year-old Nagarajan, from Nilagiri distric of Tamil Nadu, was bitien by 20 madness dog’s in 100 places on his body when he was playing ball with his friends. To my memory this is the first cruel incident I heard about dog’s madness on human. With in 30 days of time another incident was happen in Thiruvannamalai distric of Tamil Nadu a 1-year-old child was lost her life to the dogs. Before we think that dog’s much ado are only excess in Tamil Nadu, but the objection comes from the metropolis and IT-hub Bangalore, that we too faces the dog bites! 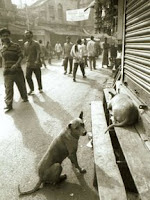 Coming to the matter, today’s news in papers lifts everyone’s eyebrows that Manjunath a 5-year-old little boy was mauled to death by a group of 15 dogs in Bangalore. The incident happed when the boy was playing hide and seek with friends, near his residential colony. There were 15 madness street dogs in the place where he was hiding, and what to tell? It’s proper time for dogs to show their madness on the boy who caught alone. This is second incident in 2 month of gap when street dogs killed an 11-year-old Sridevi in the same Banglore.

There is nothing like another state or another incident outside our boarder. It may even happed in our state, city and street, at least after seeing these incidents the government (the only one where we can complain) who keep the promise of abolish dogs in our area in their election propaganda, should care on people to stop further dog bites. Some years back, the dogs used to roaming with a metal dollar in their neck, which is said to be the licence given my government to kept dog’s as their pet and those who have dogs with out licence have been fined. But today, I can’t even see the indication of any thing like that. We don’t even know still that law is in force or not. My wish is the law should come again to fore with adding more conserve.

Near our apartment there are many dogs roaming on the streets and some times they enter inside the apartment. U already know there are much little kids in our apartment and all used to play in the evenings, after reading these news, without my knowledge I feel worry about the situation here. Before any thing seriously happens, the government must take some steps to control the dogs.
Posted by Jeevan at 1:57 am

All Is Whole said...

Local authorities have to do something to avoid this.

How are you Jeevan?? Its being long to see you???

its too pathetic to hear about it...even if local authorities wanted to get rid of them...blue cross wouldn't allow it...blue cross people should think about it...having said that it doesn't mean I don't like animals...I love them but human life is more precious than stray dogs...

I feel pity and wish they had a good shelter to take care of. When human are treated like dogs, what can you say? I meant children begging and how thery are abused??

May be you write to spca in India a detailed letter and what can be done.

Jeevan , good Topic that needs real attention. The government should make the license regular visits to the vets compulsary for the pets. By this way, they can identify the street dogs. For some strange reason, in our country dogs too populate too much. Need to check that too.

It pains to note that Nilgiri incident. Let's get rid of dogs

I was a victim of street dogs bite when i was in my child hood age, had to take Anti-Rabies vaccine(feard that Dr will put injection around my belly button..good thing they did not:(:()..

Still i am afraid of street dogs..

Hello there!
I got here thru Krystyna`s site.Nice blog you have here ;)

Hi Jeevan!
As a child I was also a victim of dog bite. Very needful post!!
Have a great Sunday!

Sorry, I write wrong my blog's address.
All the best to you!!

hmm, yesterday here in karnataka , all papers carried this news. a small boy bitten to death by stray dogs. a good point putforth. But a lot needs to be done in handling stray dogs.

enna seiya, all money given to handle stary dogs , goes to the minister's dogs. CORRUPT TO THE CORE

Great topic.
It is necessary for the municipal authorities to do something about this situation.

how could the authorities just let the issues past? :S

aren't they suppose to be controlling the population of stray dogs and protect the kids?

Prashant – Hi, I am doing fine:) How are u friend? they must control the street dogs.

Syam – the government with blue cross must come out with a plan to control the dogs, street dogs need a place to take care, instead of killing them.

Priya - I say those abuse the children have no brain! The begging children’s can be saved only my children care organizations with the support of govt. I will try to write to a local administrative and to local paper.

Sree – that may be fine for sometimes, but not many times. What that one-year child did for the dogs, why should it kill the kid. Namakea ippadi irukkea, Aantha parentsku eppadi irukkum, very sad na.

Thooya – ya they need it.

Shiva – there were times when dog vehicles come and catch the street dog, but nowadays non care about them. If we see most of the dogs roaming in the streets where, pets for slum and hut residents! Let see what steps were taken before any such incidents happen.

Balar – Welcome here:) Thanks. In my child days i have big fear about dogs. I have heard from some that they were injected 6,7 or more in their stomach, what pain must it be. Hum…. Where are they taking? Lets see.

Krystyna – even we need to inject if their teeth touch our skin… Thanks dear! have a enjoyable Sunday too.

Barbi – every thing was developing in our country, but to time to care about the street dogs. If the local minister kept mind to do something for dogs, they can easily do it. Thanks for checking chennai sangamam, but I missed to catch them:(

Ashish – thanks and welcome here:) it needs immediate action.

Amutha – residents here are not ready to protest in a consensus against street dogs.

here in Aus there r no stray dogs at all. I know that India and Sri Lanka have many roaming in the streets. Authorities need to do something abt em.

Keshi - cool to know their are no stray dogs. let see what they are doing here!