India will fulfill its 24 years dream!! 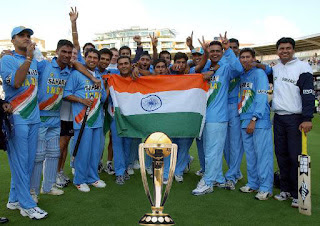 I don’t have a big craze on cricket, but when it comes to World Cup I am with my nation, which was very crazy on cricket. Everyone is getting ready to the enjoyment in fun of sun sand and cricket on the Caribbean islands from 13th. Indians across all age groups are getting ready with a special preparation to watch the game that would start only at night, IST, given the time difference. And also exams time here, with the world cup fever. It would be a difficult situation for the parents to divert their children’s attending on studies than cricket.

The other day the Indian cricket team left to the Caribbean Islands, with great expectations and billion prayers of our fans. Making the team India for world cup 2007, the biggest World Cup since the first edition in 1975, it is being held for the first time in the West Indies is a story in itself. For almost two years, our Indian players were observed, tested, branded, discarded and reinstated before the selection jotted down the final fifteen. Dressed in newly designed sky blue outfits are all set to launch a fresh onslaught for the coveted trophy, after being put through a painful and sometimes logic-defying churning. This time around team India is a blend of experience and naiveté with the scale tilting heavily towards the former.

Of course, the core of the team is made up of battle-scarred commanders, with the big three of Indian cricket Tendulkar, Ganguly and my fav Rahul Dravid forming the batting mainstay with the talented Yuvraj singh, Sehwag, Anil Kumble, Zaheer khan, and youngsters like Dinesh karthik, M.S.Dhoni, Sreesanth, Ifran Pathan and more… Experiment and flexibility have been the password for success in the Greg Chappel-Rahul Dravid period; now it is time for the players to settle down in specific roles. Each one has a clear-cut job profile, with no scope for ambiguity or job duplication. Seven batsmen, seven bowlers and a wicket keeper who can also bat. Will they cross the finishing line ahead in the rest of the field? Let we all wish them to Won the big cup. Cheers Indian team!
Posted by Jeevan at 5:48 am

Yes Jeevan,Well balanced team and all are in good form..Lets wait and see..

Good luck to our team..

Its always a dream to win when it comes to cricket.

Good luck to our team:)

Hi Jeevan!
I'm not a fan any sport's teams, but I wish
a good luck to your team.
Thanks for this inform. Maybe I become a fan...
Have a great Sunday!

Its a balanced team alright ! But as the adage goes, may the best team win !

Not sure why the World cup is scheduled always during the exams:(

Jeevan, I join hands with you to wish India a great success.

oh yeah, every1 talks abt this..hmmm i think aussie got it 4 da last 2 times.. i want someone else to take it..

Good luck to the aces!

Today I was not able to go thru ur blogs cooly.

In the morning I read ur cricket post and when I was reading one of krystna's post regarding bananas
my Project Manager called me and told "I think U can add more to ur skill set, go thru oracle whenever u r free" nu
blog padikadhama thapu nu decent thitama solitanga

So when I came back to my seat I closed the blogs and now only I am opening to post this.

As u said in ur post, even I used to switch btw TV and book and that too I was in my 12th during one of the world cup.

This time for sure INDIA ONLY WILL WIN,... sare jahan se acha HINDUSTAN hamara hamara

I loved reading ur post regarding bananas in "your health and well being". Are u a doctor krystna?
Even I am a health conscious person. I love bananas a lot. I eat 3 daily.
But today morning i forgot to eat :-((

R u working in US?

Lets hope they do well. Nothing like doing well in cricket.