In our lives the biggest nature resource “WATER” has an important part to holds our lives. There can be a day without using water…? As today the day of Coping with Water Scarcity declared under the United Nations General Assembly’s World Water Day, I like to write something related to water. If we tell water the first thing comes to our mind is Freshwater that was called drinking water. The Water covers 71% of Earth's surface, and the more quantity is on oceans that non-usable for humans. The except amount of water are useable that we get form, rain, rivers, lakes, groundwater and sea ice known as freshwater. In our human life, we need water to drink as well to food that we get through agriculture. In the freshwater more quantities are spend for agriculture.

In the forefront countries India is one among to produce more foods mostly paddy, sugarcane, wheat, pulses, vegetables. In today’s time the agriculture is decreasing because of this water scarcity. Little seasoned rains, Drought Rivers, denial of releasing waters from neighbor states makes the farmers disappoint to do farming. If we put a question what’s the way to get away from this scarcity? All most everyone brings the linking river thought. This was the speech that spreads in this 21’s century, with out finding any sign that it could be possible or not. But the Australia has comes with hope that its possible to link rivers. Water sharing was not only here, but also in Australia were Queens land, Victoria among 6 states has struggle to get their water. Like Karnataka their was this Victoria protest to sharing water, after some talks they got a solution that was linking the rivers and this brought a good farming resource their.

There were some ideas to give bye to this scarcity. Can we take this water scarcity is because of climate change and natural disaster? For more than 100 years (I think) we haven’t see such changes in nature that was over drought and over floods. Now what can we expect (that are already in process) is rainwater harvesting by collecting every drop of rain. This is one of the best idea that not all are using it properly. In some of the developing countries the raining is variable and the raining days are little. In India 50 percent of raining days are minimum 15-20 days or less than 150 hours out of 8,760 hours a year. This varies in other regions like more than 150 days in northeast and less than 10 days in western region with 14,000 millimeters of highest annual rainfall in Cherrapunji.

With this condition, water for drinking and water for irrigation brings difficulties between people. In this water harvesting, the villagers can be the first and easy going with this technology. What farmers and village administration need is to come out with a plan to use the remote sensing technologies to locate natural underground dykes were they can able to holding the little rainwater in like small check dams that allows it to seep underground and recharge the groundwater. This technology will work for other parts of the country (with variable rainfall) or not, this would work well with Tamil Nadu. Instead exploit of rivers and dams, which are the key source of supply. With this harvesting even after two years of poor rainfall and backbreaking drought, it will help villages to withstand the worst. Water in rivers and aquifers is only a small portion of total rainwater availability. Dependence on them alone can lead to an unbearable stress on such sources. This technology was successfully with in a village in Gujarat, since back in 1985 over 45-check dams in an area of over 1,000 hectares. 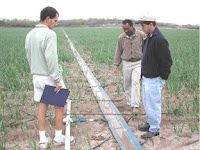 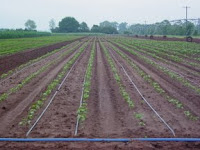 With this and the latest new way of irrigation has introduced in some villages in South India gives hand to produce more with little waters. The drip irrigation enabled farmers in these villages to earn more and also increase the area under irrigation by using the water they saved. Drip irrigation, also known as micro irrigation is an method that applies water slowly to the roots of plants, by depositing the water either on the soil surface or directly to the root zone, through a network of valves, tubing, with the goal of minimizing water and fertilizer usage. Drip irrigation has been used since ancient times, but modern drip irrigation has become the most important innovation in agriculture since the invention in the 1930’s, which replaced wasteful flood irrigation. It may cost more for the poor farmers to process this Drip irrigation, it hopes if this irrigation spreads everywhere we can easily free from water scarcity. Except paddy, this irrigation is used extensively in areas of water scarcity and especially for crops such as sugarcane, grapes, coconuts, cotton, groundnut and other vegetables and flowers. If India wants to become a developed country we need to increase the agricultural production, so we have to bring a proper water supply and storage as well we should realize the important of freshwater and bring thrift proceedings.
Posted by Jeevan at 2:54 am

Jeev:
Its world water day today and your post very well gos with it.

I wish they make rivers nationalized first and let the farmers live to see good life.

Thanks for the information Jeevan. I think, we whould be water conscious rather than being time conscious:)

Hi Jeevan!
Very needful post! Water is a big problem in many countries. We cannot live without water. We need good water for our health.
Thanks for writing about WATER!!!
Maybe you'll find interesting this:
http://www.watercure2.org/

May this day brings you health and happiness!

good one!, right on world water day. What is more bad is that this is already made a commodity. water sold in bottles.. is too much.

Sree – what gift u want friend?:) Destruction of forest are the loses of rains. Thanks sree:)

Kathy – Hi dear I am doing fine and hope u too:) nice to see u back in action! Hugsss.

Priya – This post is for World Water days that the coping of water scarcity. Its everyone’s wish, but the state govt. will not easily give it. Above all linking rivers is more important na.

Shiva – Thanks! If water comes for correct time, there won’t be any loss.

Krystyna – Thanks dear, will check the site:) Good more info about water… sure we need to learn more about water, expecting a healthy post about water.

Barbi – Water is free nature resource, that really makes dislike when it come to situation to buy for money. Will blogroll u soon friend:)

You have brought out a very important point Jeevan !

Water is such a precious commodity that we better take care of it well.