Pony Express (as a tag) 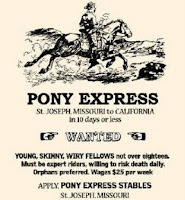 This post is out of rules, which was to grab the closest book and write the 5th sentence from page 123. Here is an info tag post. I present this post (tag) to my friend Kay, where he tagged me.

Nowadays, when we want to communicate, we either email the person or SMS them. Everything happens at the click of a mouse or the pressing of few buttons. But in the olden days it was not so. At one time, if we wanted to mail a letter, we wrote the letter, put it in an envelope, stamped the envelope and dropped it in a post box. After that it was the postman's job.

But in the 1850s for people in America to communicate to someone in the west, their letters went by overland coach and usually took weeks to get there. One enterprising freight company decided to speed things up by hiring 80 men to take the mail to the west on horseback. In 1860, the Pony Express was formed. The riders for the Pony Express were chosen for their lightweight as well as their riding ability. Most of them were young boys. The route they undertook was a rugged one; it went from St. Joseph Missouri to Sacramento, California, a distance of over 1,800 miles! Each rider rode a total of 75 miles, changing ponies at stations posted at ten-mile intervals.

The mail was carried in four leather boxes, which were attached to a special saddle blanket, thrown over the saddle. The changing of ponies was done in two minutes. The speed was a bonus, because it cut the average delivery time from several weeks to about 10 days. The fastest trip was made in seven days and 17 hours. This record was set by the rider carrying President Abraham Lincoln's first message to Congress. The poor riders had to ride through unknown terrain; some routes exposed them to attacks from Red Indians and led them through dangerous territories.

For all this dangerous work they received decent salaries of $25 per week. Newspaper ads for riders listed one important requirement orphans preferred. Though exciting, the pony express was a short-lived experiment. It lasted for only 19 months. By then, from coast to coast there was a telegraph line and this was definitely a faster way to send messages. We sure live in better times. Just imagine waiting for a fortnight or more for a message to reach a dear one and another fortnight for their answer to reach us. Aren't we just grateful for all the technological developments and latest means of communications?
Posted by Jeevan at 7:32 am

i have seen this before.

I AM FIRST THIS TIME.

Hey Jeevan, nice post... this was a nice information to know about.... Yeah we are surely lucky to have such advanced communication... Thanks for doing the tag :)

Barbi - :) Thanks for being first!

KK – Thanks friend. It’s a wonder process of communicating in seconds, sure we are lucky:)

Good one jeevan, never heard abt this pony express..

Jeev: A beautiful tag indeed and you comeup with nice info' here.

An informative tag Jeevan. It's true honey that technology has shrunk up the world