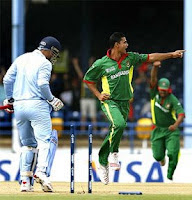 It’s really a great disappointment for Indian people, on Saturday night, (whom where in the dreams of world cup) where the B section India lost to our neighbor country Bangladesh in 5-wicket difference in the World Cup Series. What sad us was the deceit of losing 5 wickets below 20 minutes. Because of this the cricket fans in India were in seethe and involving in protest; burning and stone throwing on players house.

I feel their sense and the love they kept on cricket, but involving in violence must be contempt. But who would be response for a citizen of Gujarat who died in cardioid attack, after seeing that India defeat? After all it’s a game, losing and gaining are normal. When our team wins, we all enjoy; when they lost why are we not with them. If we itself protest against them, then who will support them.

India’s sorrowful bating, have meager the hope between fans of winning the world cup. That’s not the final match is it; we have another chance today to face the challenge against Bermuda. We can hope this time they will score more, but India needs more concentration and practice to face Sri Lanka to enter Super Eights. Between Ganguly’s fans were not in this protest and praising his 66 runs to declare he is the true champion.
Cheers Indian Team!! Don't loss hope.
Posted by Jeevan at 12:29 am

Jeevan, I fully agree. Damaging the house of Dhoni, burning poster is all very immature act. Are we losing on the game spirit by being too devoted to the sport? This is no good sign.

Jeevan,
I was very disappointed with indian's performance in that match...but again it's a game.
Hope our guys will bounce back..
Did you watch this match???
One of the spectator's banner was
"Father loosing Son winning"..:):).

I dont really dono how the game of cricket works but i certainly agree that they should be given the benefit of doubts.

When our team wins, we all enjoy; when they lost why are we not with them. If we itself protest against them, then who will support them.

I agree Jeevan..hope we will do good for the next match and so on...

Ravi – They haven’t changed, this is continuing process every time India loses. We have to accept it.

Balar – watched little till India losses all wickets. It was a disappoint match for all, but hope this is a test; sure they will come (already they are scoring good now against Bermuda) back in force. No I dint saw that banner.

Amutha – they must have been played well… with keeping their cricket loving country in their mind. Let’s see.

Syam – They are playing well against Bermuda now and I hope they will win. But they must be care full while playing with Sri Lanka.

Its a shame to talk about losing with B. I no more watch the game.

Just a game! Loosing and winning is part of it. Let the winner be the one who deserves. Take it in the right spirit.

i lost all my interest after seeing india lose :)